“Apple Switzerland has inadvertently revealed an upgrade to the company’s travel router that takes advantage of the latest Wi-Fi standard.

Visitors to the Mac maker’s Airport Express page for the European country are greeted with a description that clearly identifies it as a new model, as MacGeneration reports.
“Connect to the Internet, print, and share music from iTunes with any room in the house. Everything without wires. Now with 802.11n as standard,” the description reads, translated from its original French.
As with the Airport Extreme, Apple promises as much as five times the speed as the earlier 802.11g standard, which is used by the current Airport Express model. The price and core USB printing and disk sharing features also appear to be unchanged from the original.
The slip is not known to have appeared on any of Apple’s other pages but would signal the first clear change to the Airport Express hardware, which has been virtually unchanged since its introduction in June 2004.”

Full “oopsy” screenshot below, read on. 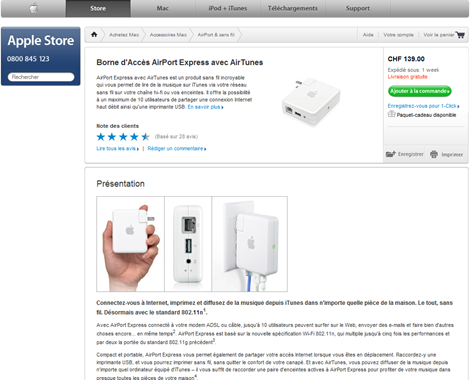