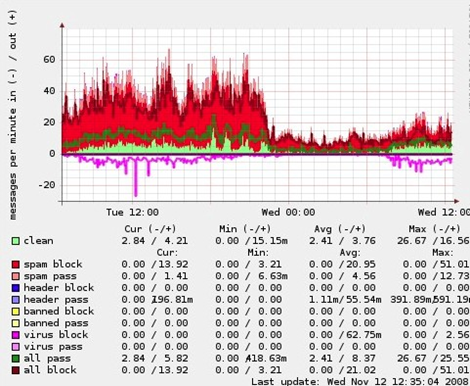 San Jose California was the home to McColo, a ISP/hosting company that apparently was a major source of the world’s spam email. The company was shut down after investigations by the Washington Post’s Security Fix Blog fingered McColo as a major spammer.   The good news… spam volumes dropped immediately by 75%!

I would love some time in a sanctioned boxing match with the owner of McColo…. I hate spam.

The chart here was sent to the Post by a German hosting facility manager, showing spam’s immediate decline after McColo’s shutdown (Security Fix has several more charts from security organizations and individuals showing the same thing). It’s fun to consider the trickle down effects here—just think of the saved CPU cycles on webmail hosts worldwide who suddenly had 70% less U.S. spam to crunch on, and the energy savings resulting?