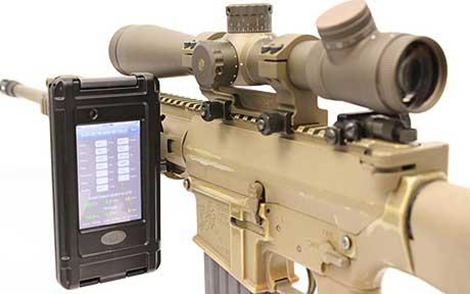 Here is an odd dichotomy – using your iPhone as a ballistics computer to get quick shooting solutions *boggle*… I guess in addition to letting you shoot the shit, iPhone now lets you really shoot the shit! When I think of a typical iPhone user, I think of some left wing metro sexual putz using his iPhone to find the shortest route between the Global-Warming-Peace-Shave-The-Whales Rally and his favorite organic sushi bar… This is despite the fact that half the iPhone users I know are gun toting nuts – I blame Apple’s pervasive marketing.

Anyhoo, for around ten bucks you can download the BulletFlight app from the iTunes Store which will allow your rifle mounted iPod (OMFG!) to calculate your shooting solution after touch-tapping the wind conditions, ammo type, distance and wind speed. The application features built-in profiles for three weapons – the M110 semi-automatic precision rifle, the KAC PDW, and the 14.5in SR16 rifle. Users can add more weapons to the list. “Environmental calculations are based on the Sierra Bullet model,” says the BulletFlight iTunes entry. “Up to five ballistic co-efficients with corresponding velocity thresholds may be used for each profile.” I am sorry to say, but attaching an iPhone to a REAL sniper rifle seems about as functional as mounting a 30mm autocannon on a Segway. A serious sniper using a REAL rifle like a Barrett, would most likely opt to go with a REAL integrated electronic ballistic computer that mounts directly on the riflescope and couples to the elevation knob. Admittedly, the downside of the BORS system is it doesn’t play MP3s or gimp apps.