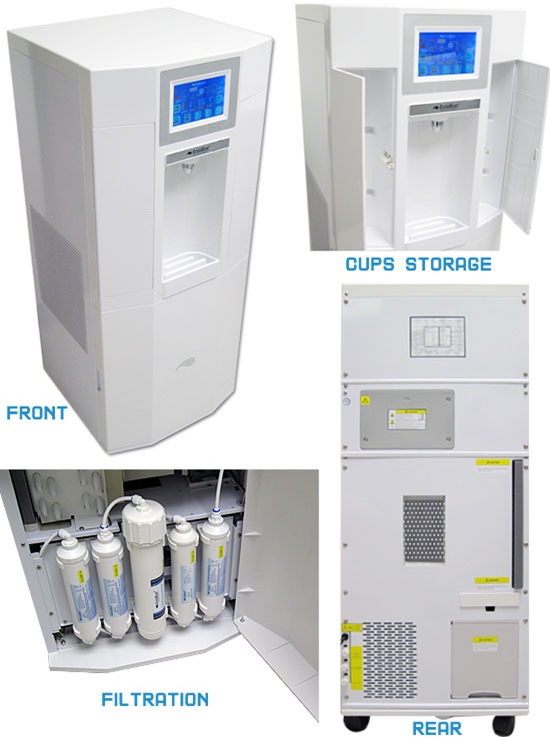 Ever since I first read about the Atmospheric Water Generators (AWG) I was intrigued.  The idea of plugging in a gadget, waiting a handful of hours, then having "clean" drinking water out of the air just seemed like magic to me.  So, after reading about the AWG's for about a year, I finally purchased an EcoloBlue 30 water generator.  Was it really All That?!  Read on for a review of the EcoloBlue 30.

Let me start off by saying I have only had the EcoloBlue 30 (newer version than the EcoloBlue 28) for little over a week.  In that time though, it has been running 24 hours a day and an office of about 10 has been putting it through its paces.  Some people in the office are (like me) excited by the technology of the gadget, some are amazed this thing works and wonder why it isn't in third world countries, some quietly dig and respect the nerdiness of it all, and lastly there are the Beavis and Butthead types that claim we are drinking their farts.  I am not making this up (not one to point fingers,Craig, Nelson, and Ray are guilty of this) they claim that their fart vapor is being turned in to water.  We have low hiring standards here.

Lets start off with the obvious.  An AWG is basically a dehumidifier.  The water is condensed from the air, collected, and then filtered and stored for drinking. Again to state the obvious, the unit’s optimum environment would be some hot and humid place (giggidy), but it still works pretty well in the 60+ degrees with 40+ humidity.  The idea is pretty simple when you think about it.  EcoloBlue has taken the idea, polished it a bit and sells it for $1,399, not cheap at all, and you have to buy filters every 6 months at a minimum, plus the unit sucks a modest 280W to keep itself going.  The upside is, you never have to buy bottled water again.

The water goes through a 12-stage filtration process which includes charcoal filters, carbon filters, a mineral filter, a Filmtec reverse osmosis membrane, a post carbon filter, and 3 Philips UV sterilization lamps.  There are two stainless steel tanks, one for water collection, and a 3 gallon storage tank on top.  In my opinion you can't over filter the water.  After following the manual (more on that later) we turned on the unit and let it run constantly for a full week.  It took about 3 days to fill the tank with water with our office humidity levels around 48% to 55%.  Not sure who is getting the quoted "8 gallons a day", maybe someone in the tropics where humidity is very high.  The humidity in the office drops a bit when the unit runs which I like.  The first two batches of water tasted like plastic, so we dumped about 6 gallons of water before getting to decent tasting water.

Some things from personal experience – the unit came awesomely packaged, box inside a box inside a big ass wooden box – kinda like that promiscuous lamp from The Christmas Story. One thing we noticed immediately, the manual and the quick setup guide were nowhere to be found, and unlike just about every company on the friggin Internets, the EcoloBlue website did not have it available for download *smack*. The upside was they answered their phone and emailed us the PDFs right away.  See this is the really important part!  Because being the adventurous soul that I am, possessed by the manly Manuals-Are-For-Pussies spirit, my first inclination was to just plug the frigging thing in and get some damn water… Ah, but the first thing the missing manual and the missing quick guide say is some scary shit about NOT PLUGGING THE DAMN UNIT RIGHT AWAY, LETTING IT JUST SIT UPRIGHT FOR HOURS, OR HORRIBLE SHIT WILL HAPPEN, YOUR UNIT WILL BURST INTO FLAMES (kidding, of course) AND YOUR WARRANTY WILL BE VOIDED…. Ummm yeah, thats pretty much what it said, and a good thing it came with it (not). Oh and BTW, the manual on the EcoloBlue 30 is not great by any stretch. Not the worst I have seen, but a fair amount of Chinglish.  We figured most things out, but if you get stuck you can call the company, they actually answer their phones.  Kudos EcoloBlue. 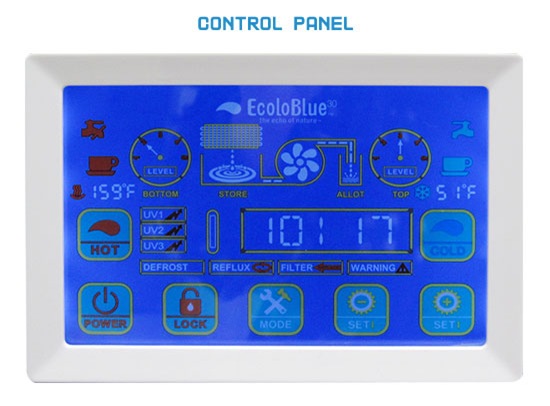 The user interface is a touchscreen LCD display.  The display is loaded with icons, pictures, and text which at first glance is a bit overwhelming to a normal-ish person.  On the other hand if you are a nerd, especially with OCD, this thing is seriously cool and the only thing that’s missing is the ability to stream porn and play MP3s… The LCD attempts to let you know what the machine is doing in an overbearing sort of way, but to a geek this is pure uncut LCD bling.  There are no standard buttons on the unit anywhere, everything is activated via the touchscreen including the cold/hot water buttons.  Some people like this (nerds), some don't (normal peoples).

All-in-all the machine has operated as expected and is making enough water for an office of 10.  We use the water for general drinking and the coffee/tea machine and it keeps up just fine. Make sure you set your expectations realistically, you can not use it to take showers.  Oh and Craig, you can hardly taste the farts, so stop whining!

I will update this review after a few more months of use. (Also, the picture showing cup storage is a bit of an internal joke here… those two doors are actually for carbonation tanks if you buy the ecoloblue 30s carbonated version)

47 Comments so far. Feel free to join this conversation.