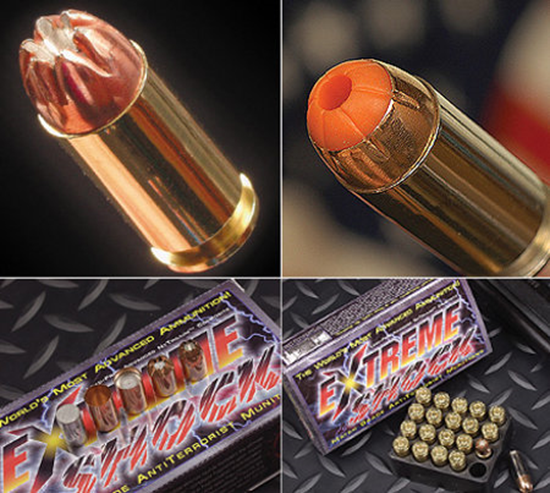 These bullets are 10% funny for being marketed as anti-terrorist munitions and 90% scary for their massive stopping power.  Are terrorists built different than the rest of us?  Either way these bullets appear to be very legit.

"It’s a new war, and our nations best warriors now carry the world’s most devastating ammunition! As we entrust the de-fense of our freedom in our finest professionals, they now carry an advantage beyond their own heroism! Over ten years in co-development with Special Operations Groups and Federal Law Enforcement, the new ExtremeShockâ„¢ Explosive Entry tactical defense rounds represent the ultimate refinement in lethal bullet technology. The compressed Tungsten-NyTriliumâ„¢ Composite fragments upon impact, leaving a wound channel of catastrophic proportions. The expansive fragmentation characteristics of the ExtremeShock rounds transfer the bullets energy in a far faster time span than conventional hollowpoints. The resulting stopping power is utterly devastating. E-Shock rounds are engineered to expend maximum energy into soft targets, turning the density mass into an expanding rotational cone of NyTrilium matrix particles, causing neurological collapse to the central nervous system."

Read on for tons of additional scary bits about these wicked bullets.