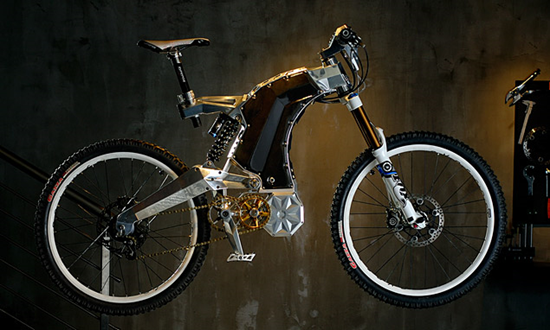 As if driving your Prius wasn't enough, the M55 Hybrid Bike wants you to take the Smug factor to your local mountain biking trail.  No doubt the M55 Hybrid Bike is wicked looking (no idea of the real performance specs yet, waiting for our sample unit) but wonder how the extra weight will feel pedaling home on a dead battery.  Either way, I want one, ha.

After checking out the bike on the M55 website (watch the video and look at the logo) I felt like I was getting a transformer, not a bike.  No idea of pricing or availability but it surely won't be cheap!

We build hybrid e-bikes. With our models the rider doesn't even have to stand up while pedaling up the mountain. When we experienced this sensation, we knew we were on the right track. At the same time we would like to provide a viable alternative for those, who used to ride a motorcycle off road, but who are not allowed to do it anymore due to restrictions.
The concept of the M55 bike is based on the hybrid drive theory, hence the electric-powered assistance is only offered during active pedaling. This is not an electric motorcycle, where you turn the throttle to bring the vehicle into motion. The M55 bike has to be pedaled – the power of the rider is augmented by the assistance of the electric motor. This in turn provides more power than what is offered by the usual kits and also offers a much greater range. In ECO drive mode, the M55 rider can reach 100-120 km with one charge – and not only in laboratory conditions! Due to the hybrid drive concept, when the battery cell is completely depleted, the bike can be used as a regular bike, since it is designed to be pedaled from A to B, just like in the case of a conventional bicycle.
Thanks to the greater average speed and the fantastic battery capacity, you can reach places where you could only pedal with extreme effort. See more without resorting to polluting the environment or making any noise.
The technology employed in the M55 bikes is virtually maintenance free, and is designed for extremely long life cycle. For example, the battery cell will only lose more than 10% capacity after 70,000 km. A properly maintained Rohloff internal gear hub also can last for more than 12 years! The M55 bikes are designed for much more than 1-2 seasons, like the other e-bikes available. It will serve its rider for a long time with maximal efficiency and minimal maintenance.