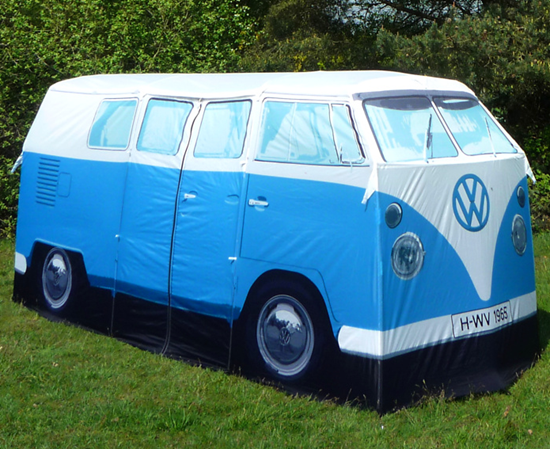 Most tents today are purely functional, and the designs leave a bit to be desired.  Why not have a tent that looks like a dinosaur or a VW van for that matter?  The cool VW Bus tent pictured above is actually a reality and can be yours for about $486.  Not exactly cheap, and it isn't available to ship until the end of August 2011.  Bummer.

"But there's more to this highly realistic pretend hippie/surfermobile than mere good looks. Just like its vehicular counterpart you can stand up inside "“ handy if you don't fancy crawling around on your hands and knees after a day at the main stage. What's more its fabric roof and sides are 3000mm and 1000mm respectively "“ mighty impressive, especially when you consider British Military spec is only 800mm (and we consider things like that quite a lot).

Factor in two zip-separated double-size rooms, allowing couples to sleep/knit yoghurt/spread the love in private, plus an outer that can be put up first to offer some shelter as you erect the other bits and bobs, and you're looking at the greatest thing to hit the world of boho living since, well, since the original VW Camper Van. All together now, "˜If you're going to San Francisco, be sure to take your Vee-Dub Camper Tent,'"