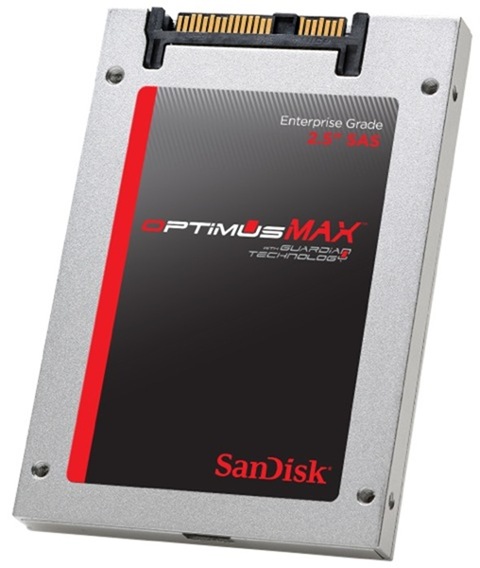 Eventually most of the data stored on our gadgets and computers will be held in SSD (solid state drives).  In other words no more of the spinning platter hard drives that work like record players.

The main problem with the SSD market today, aside from the cost, is that there aren't a bunch of higher capacity options available.  It looks like SanDisk is aiming to change this with their latest Optimus MAX SSD drive.  This SSD drive will be the world's first 2.5-inch Serial Attached SCSI (SAS) SSD drive at 4TB!  The enterprise folks are the most likely target for this SAS drive as they can swap out their legacy SAS platters for this newer, faster, cooler SSD cousin.

SanDisk hasn't announced the Optimus MAX SSD pricing yet but they did release some pretty impressive specs.  Users can expect sequential read/write speeds of 400/400 MB's and random r/w speeds of 75,000/15,000 input/output operations per second (iops).

"Customers have been looking for a way to transition their data centers from HDDs to NAND flash, but have been forced to decide between cost and performance, or give up important functionality," said John Scaramuzzo, Senior Vice President and General Manager, Enterprise Storage Solutions at SanDisk. "The Optimus MAX eliminates the need for compromises. We believe that the Optimus MAX will be a disruptive force within the storage industry, catalyzing many organizations to make the switch from their HDD-prominent data center infrastructures to SSDs."