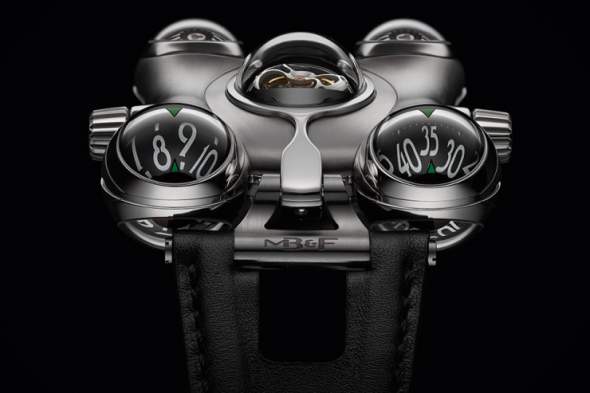 Holy shamoly, $230,000 is a lot of money for a wristwatch… but it sure looks cool. The folks at MB&F (I have never heard of them because I am poor) have created their latest watch dubbed the HM6 Space Pirate… and it is awesome.

Horological Machine No.6 (HM6) "˜Space Pirate' has been designed to operate in the hostile environment of space: the space on your wrist.

In each of the four corners of HM6’s biomorphic case is a 360° sphere, capped top and bottom by transparent sapphire crystal domes. Up forward, two semi-spherical indications rotate vertically, displaying hours and minutes. Back aft, driven through multiplying gearing by the automatic winding rotor, twin spherical turbines spin horizontally, automatically regulating the winding system in case of excessive speed to reduce stress and wear.

The transparent central dome houses a 60-second flying tourbillon, the precision regulator of HM6’s Engine. This flying tourbillon can be protected from UV radiation, which speeds up oxidation of lubricating oils, by a retractable shield operated by a crown on the left side of the case.

While the transparent cupola on top of HM6 Space Pirate offers a tantalising glimpse into the sophisticated Engine below, the sapphire crystal display portal on the back reveals more of the 475 finely finished components making up the highly complex movement, which required over three years of development. Also visible through the display back is part of the winding mechanism and the platinum 950 winding battle-axe rotor.

Video of the HM6 Space Pirate after the break.