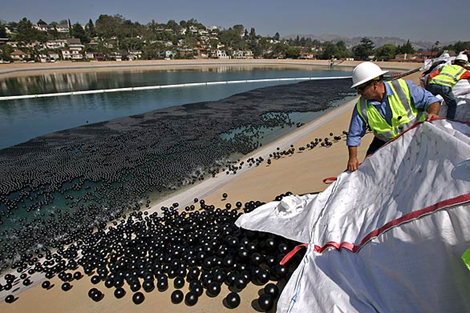 The Los Angeles Department of Water and Power dropped 400,000 black balls (that’s different than tea bagging btw) into Ivanhoe Reservoir – to protect the drinking water supply. The water needs to be shaded because when sunlight mixes with the bromide and chlorine in Ivanhoe’s water, the carcinogen bromate forms. Bromide is naturally present in groundwater in this area and chlorine is used to kill bacteria. Thus a simple, yet effective, black ball gadget is used. These black balls are also referred to as “bird balls” (who knew), commonly used by airports to prevent birds from gathering in water alongside runways. Soo to recap – a wicked cocktail of black balls, bromide and chlorine is what constitutes safe “drinking water” in LA. Enough Said. 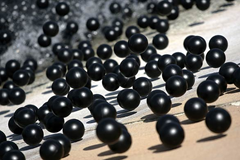 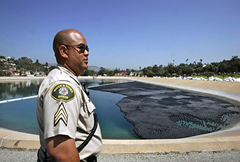 6 Comments so far. Feel free to join this conversation.