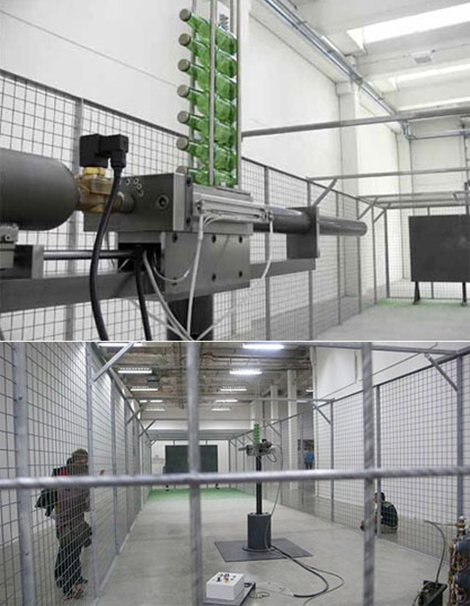 One of the world’s most pretentious, French (yeah redundant) contemporary art museums, Palais de Tokyo, is hosting an expo named Superdome. Such poignant name was chosen because the Louisiana Superdome represents a “bridge that gaps entertainment and disaster” *cough, pretentious*. Yet in this expo littered with shallow symbolism and triteness something stood out – a nitrogen powered cannon that shot Heineken beer bottles at 600 km/hr (that’s 373mph for the metrically challenged). Green bottles fired against a steel wall , at a speed barely perceived by the eye, shattered and created a carpet of glass shards. Visitors, separated from this spectacle by a cage, could decide how closely they wanted to view this action based on their testicular fortitude. Arcangelo Sassolino, the brain behind this display, wanted people to be “shaken” by his creation because he believes that society has become jaded (no shit). Considering Arcangelo’s prior work consisted of anemic machinery, this is definitely a step in the right direction. Maybe for his next project he can “kick it up a notch” and shoot a beer keg through a mass driver into the Palais de Tokyo… VIDEO PLEASE!