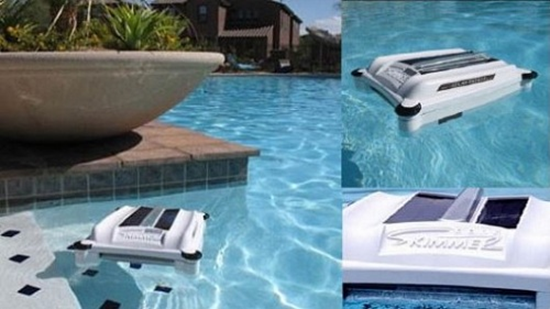 Two of my favorite things… solar and water… have come together in a very cool and innovative product.  The Solar-Breeze Pool Skimmer is basically a solar powered roomba for the surface of your pool… genius.  Read on for cool details and video of the solar powered pool skimmer in action.

A couple of things that I like about the solar powered pool cleaner… the design is simple/smart and seems to get floating pool debris by patrolling where it tends to end up.  Also, the built in chlorinator is a nice touch.  We used to use the dumb chlorine floater (everyone does) but it often ended up stuck in one corner of the pool which means the chlorine was not being evenly distributed throughout the pool.

One question… Where do I buy one?  Can’t find a link to buy the product anywhere!


The Solar-Breeze is an intelligent, solar powered, robotic swimming pool surface skimmer, combined with a swimming pool Chemical Dispenser. It operates on solar power alone, and on internal storage batteries, charged by the sun during the day. As such, it needs no electrical connections, and operates on hundreds, or even thousands of times less electric power than required by competing pool cleaners.

* Most dirt, dust, bugs, pollen, and debris entering a swimming pool will first float on the water surface for a considerable time before sinking into the water.
* Surface tension initially causes dust and debris to float, even dust that is heavier than the water. And even the lightest breeze will causes this debris to float to the downwind side of the pool, where it forms a sort of visible "film" on the surface. This film of dust and debris is more visible when viewed at a low angle (with eyes close to the water) in a completely calm pool.
* The Solar-Breeze is the only pool cleaner that is specifically designed to search out and scoop up such floating films. Its slowly rotating powered paddlewheels scoop up the film of dust and debris gently, before it has an opportunity to sink.
* The powered "Bumper Wheels" on the front corners of the Solar-Breeze rotate the unit each time it hits a pool wall, encouraging it to travel parallel to the pool edges, where dirt and debris is already floating as a wind concentrated "film".
* The Solar-Breeze is designed to spend much of its time moving along the edges of the pool, where the dirt naturally floats, occasionally changing directions, to maneuver around obstacles, or to head across to the other side of the pool.
* It does not need to move fast, only to be persistent. Indeed, if the Paddlewheels moved any faster than they do, or if the Solar-Breeze moved across the pool much faster than it does, it would tend to swamp the floating film of debris, and make it sink to the bottom before it had a chance to be gathered and filtered out of the water.
* A film of dust held together only by water surface tension is very fragile. It must be approached both slowly and gently for the Solar-Breeze to be able to gather the dust while it is still on the surface. Excessive turbulence would cause sinking of the dust film on either side of the Solar-Breeze.
* Vacuuming, sweeping, or even swimming in the pool will sink this film of dust and debris to the bottom of the pool. It is most efficient to vacuum the pool and swim AFTER the Solar-Breeze has cleared the surface of its debris.

* Solar electric power is "weak" but free, and it keeps coming, hour after hour, day after day, as surely as the sun rises.
* It is an engineering feat to design a solar robot capable of moving, even slowly, as the designers of Martian Rovers discovered. This unit uses advanced Solar Panels, allowing it to do a very significant amount of work, movement, and filtration during the course of a day.
* Storage batteries allow the Solar-Breeze to "escape" from shadows. Otherwise, the first time it entered a shadow, it would stop, and never have the power to navigate back into the sun. As it is, a microprocessor with very sophisticated programming is required to make SURE the Solar-Breeze spends enough time in the sun to charge its batteries and prevent it from getting stuck in a shadow.
* Because of the need to charge batteries while the sun shines, the Solar-Breeze will sometimes behave oddly when its storage batteries are less than half charged.
* When batteries are less than half charged, the Solar-Breeze goes into "LOW SPEED" mode.
* In "LOW SPEED", the Solar-Breeze’s Paddlewheels will both turn slightly slower, to conserve power.
* In " LOW SPEED " mode, the Solar-Breeze will turn off its rear (propulsion) Paddlewheel each time it enters the sunshine, and turns it back on each time it drifts back into shadow. This “escape from shadow” maneuver allows the Solar- Breeze to spend move slower in the sun than in the shade, giving the solar panels more time to charge the batteries while in the sun. But, even while the batteries are charging, the Front Paddlewheel is still continuing to do useful skimming.
* At night, the Solar-Breeze will always operate in “LOW SPEED” mode. It may also operate only intermittently (with long periods with the motors turned off), sometimes with only the front paddlewheel operating, so as to conserve as much battery power as possible for being able to “escape from shadows” in the early morning.
* During prolonged cloudy weather, and during the winter (when sun angles are low) it is possible for the Solar-Breeze to run out of battery power. In this case, it might enter a shadow, and have insufficient stored electricity to escape from the shadow.
* If the Solar-Breeze ever gets trapped in shadow during the day, and the motors are off, it means it has simply run out of battery power. There has not been enough sunlight to allow the unit to run, and it has no battery power left to get back into the sunlight. "Eventually" it will gather enough charge to move itself again, even from indirect light.
* When the Battery gets this low (after dark cloudy weather) it speeds up recovery considerably to lift Solar-Breeze out of the water, and manually place it in direct sunshine for a few hours, during the middle of the day. But, even if you don’t do this, it will "eventually" manage to charge its batteries enough (with indirect light) to sneak back out of the shadow and obtain some direct sunlight to operate again. But, when batteries are extremely low on charge, and sunshine hours short, it may get stuck in shadows several times in a row with low batteries. (This is particularly likely in pools with lots of shade, and in the wintertime, when shadows are longer.)
* In the early morning and late afternoon, solar cells do not work well, sometimes not at all, as the sun’s angle gets low. The sunlight reflects off the solar panels, without even penetrating inside. The same can happen during midwinter at high latitudes, when the sun just barely gets over the horizon. Solar cells produce maximum power when the sun is nearly directly overhead. Light that is indirect produces only very limited power. The Solar-Breeze can SLOWLY charge its batteries even in cloudy weather with indirect light. But the total operating time on a dark day might be relatively low, and the unit might operate entirely in "Low Speed" mode, once its batteries get low.
* The "Solar Day" (the time that the sun really provides "full power") is really only from 10:00AM to 2:00PM. Perhaps a bit longer in summer, and a bit shorter in winter; quite a bit shorter in Northern latitudes. If the sun shines brightly during these hours, the Solar-Breeze typically runs at FULL SPEED, once its batteries get charged up, and until they start to discharge again. During much of the rest of the day, especially during winter, the unit goes into LOW SPEED mode.
* Because LOW SPEED mode requires far less power than does FULL SPEED, the Solar-Breeze actually spends more time in LOW SPEED, especially when there is not enough direct overhead sunlight.


* A Chemical Dispenser (for commercial solid pool chemical tablets) is included in the Solar-Breeze design because dispensing chlorine or clarifiers evenly and randomly over the surface, makes the chemicals far more efficient than when spread by other means.
* The Solar-Breeze is the ideal platform for distributing the steady "maintenance" levels of chlorine needed in a swimming pool. It can carry a maximum of two 3" (Jumbo) solid chlorine tablets in its Chemical Dispenser that will slowly dissolve as the Solar-Breeze navigates around the pool.
* Only the Solar-Breeze can distribute chlorine so evenly on the surface, or do such a thorough job of releasing it uniformly near the outside walls of the pool and do so without the need to operate the swimming pool pump. This can greatly INHIBIT THE START OF ALGAE GROWTH on the upper walls of the pool, where sunshine is at its maximum, and chlorine is normally at a minimum. This release of chlorine near the edge of the pool, along with skimming the surface of fine dust that collects algae, makes a tremendous difference in inhibiting algae growth. Complete algae suppression, however, still requires occasional sweeping, vacuuming, chemical monitoring, and shock treatment of the swimming pool. While general pool maintenance is still required, this even spreading of chlorine at just the right time and places will often prevent the beginning of algae growth.
* Conventional floating Chemical Dispensers tend to stay where the wind pushes them. And Swimming pool pumps, used as Chemical Dispensers, require vast amounts of energy to pump the chemicals into and around the pool. The Solar-Breeze mixes the chemicals, slowly and gently, over the entire surface of the pool, ALL DAY LONG, with no outside power required.
* Most severe algae problems BEGIN with algae growth on the pool sides, or on floating dust or debris on the surface. The Solar-Breeze is capable of removing BOTH of these triggers for an algae "bloom" in a swimming pool, and do it with far lower use of chlorine than conventional methods.
* WARNING!!! "SHOCK TREATMENT" (whether liquid, powdered, or granular) must NEVER be placed in the Solar-Breeze Chemical Dispenser. Use of SHOCK TREATMENT will VOID the WARRANTY, as well as create a chemical burn hazard and damage the unit.
* Small quantities of granular Pool Clarifiers may be used occasionally in place of the two Jumbo Chlorine tablets. See the "Advanced Pool Care" section for a full explanation of their use. Briefly: Up to ¼ cup of granular Pool Clarifier in the Chemical Dispenser will cause "cloudiness" in the pool water to settle as a fine film of dirt on the bottom of the pool, where it can be vacuumed up. This leaves the pool water sparkling with the minimum possible time of running the main pool filter.
They behave better when contained inside of a porous cloth bag or an old sock.