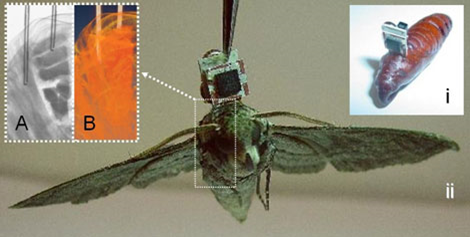 Here you go folks, your taxpayer dollars at work – DARPA (Defense Advanced Research Projects Agency) sponsors Hybrid Insect Micro-Electro-Mechanical Systems (HI-MEMS) project, which is currently in its THIRD(!) year. I wonder if the lads at DARPA were inspired by the cyber roach from Fifth Element… The HI-MEMS program’s goal is the creation of moths or other insects that have electronic controls implanted inside them, allowing them to be controlled by a remote. The animal-machine hybrid will transmit data from mounted sensors, which might include low-grade video and microphones for surveillance or gas sensors for natural-disaster reconnaissance. In layman’s terms… the bug gets a bunch of electronics hard wired into its neural system to do its masters bidding. I like the aesthetically pleasing label slapped on this monstrosity, an “animal-machine hybrid”, shit that sounds so freaking marketable and cool and vaguely eco friendly – way better than a “vivisected-mind f*cked bug with wires stuck into its brain”. This is being spun as cutting edge wetware research to help humans, you know, for “The Greater Good”. Even to my mundane intellect the absolutely mindboggling implications of these types of experiments are obvious. BTW, this research is being conducted not only on moths, but also beetles and other “bugs”. How long before they kick it up a notch and move up to the “higher creatures”?