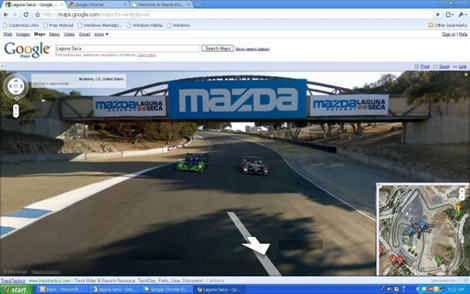 Soon, Google will let you get in the path of American Le Mans racers on the track at Mazda raceway Laguna Seca. Specifically, Google was able to roll one of its Street View trucks, which use a spherical camera to take 360-degree photos, around the track in front of the cars preparing for the final race of the 2008 American Le Mans season. You will be able to go to Laguna Seca on Google Maps, and place the Street View icon to see track features such as the famous Corkscrew, and get a sense of why it’s so tricky.