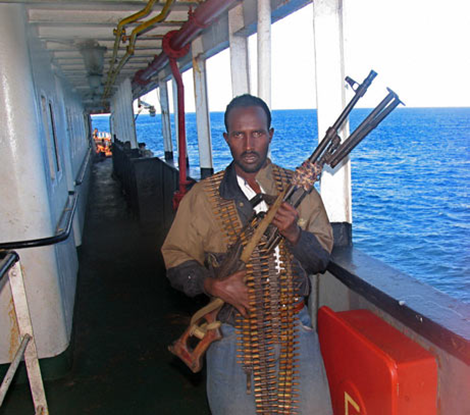 I realize that this isn’t exactly a gadget… but it is pretty interesting to me.  And, the pirates have some pretty nice guns gadgets.  The folks at Danger Room got their hands on video from some arsehole Somali Pirates.  The video isn’t from the latest hijacking of US sea Captain Richard Phillips… but it gives a better idea of how they operate.

Read on for more details and the actual video.

This video takes place on the Yasa Neslihan, a Turkish boat captured by the Somali POS’s Pirates October 2008.  This was one of the times when the Somali Pirates did well, they released the crew after being paid a huge ransom.

"There are many videos like this," the source told Wired magazine contributing editor Scott Carney, who obtained the video. "They make this video before they collect the ransom and leave the ship."

Charo Tsuma, a spokesman for the East African Seafarers Assistance Program, a piracy-monitoring and welfare program, reached by phone from Kenya, confirmed that pirates often document their captures on video.

"They make videos to show the owners that they have the ship and that it is still intact," he said. "The pirates are normally very well networked."