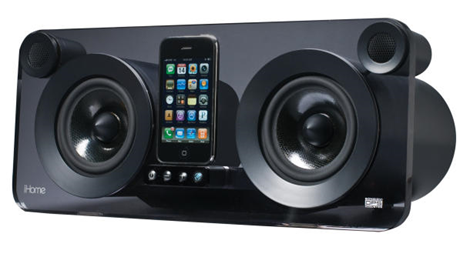 So many of the aftermarket speaker systems for iPod’s and iPhone’s tend to sound/look like crap.  In fact iHome, the maker of the unit above, has been known for making budget based systems themselves.  The iP1 Studio Series model should go on sale in July for about $300… and looks to be bucking the crap systems trend.  This thing looks/sounds awesome.

“We got an early look at the iP1 at an iHome event and it’s definitely got an appealing and distinctive industrial design (iHome refers to the smoked acrylic surrounding the speakers as "museum quality"–we didn’t now such a term existed for describing smoked acrylic). As far as the key specs go, the iP1 uses a "100 watt class D biamplified architecture with Bongiovi sound processing through twin 4-inch woofers and matched 1-inch dome tweeters." It’s also got GSM shielding for iPhone use and a video-out port for watching iPod/iPhone video on a TV. However, there’s no radio or alarm features.

The man behind the special sound processing is Tony Bongiovi, a music producer, second cousin of Jon Bon Jovi, and founder of the renowned Power Station recording studio where the event took place. The iP1 is equipped with Bongiovi Acoustics Digital Power Station, an active digital signal processor that the company says makes your MP3s sound better and maximizes the performance of the iP1.”