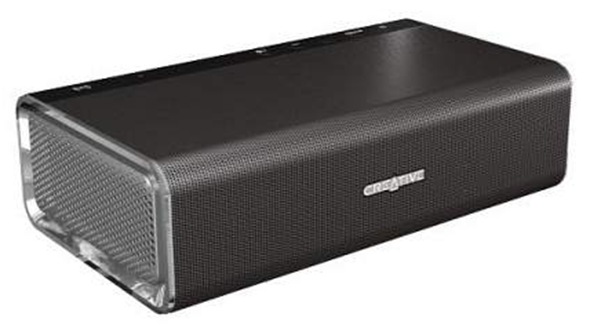 One of the main reasons the Creative Sound Blaster Roar SR20 got our attention is because of a few of the strange features like a built-in siren and the "life-saver mode".  Strange stuff.  More about that later.

When pulling the Creative Sound Blaster Roar out of the box it becomes apparent that this is one heavy speaker at 2.5 pounds.  Some people prefer their gadgets to be lightweight, and some, like me, prefer some heft.  This guy is hefty.  The design is simplistic and clean.  Maybe this is why I think it looks like a Bose Bluetooth speaker.  The colors are muted greys and blacks, the majority of the speaker is perforated aluminum, and there are plenty of buttons on the back.

The speaker isn't exactly small at 2.2 x 7.9 x 4.5-inches but it is competing with the high-end of the portable speaker market which means they have to pack some serious juice.  The juice comes from three speakers, a 2.5-inch speaker for mids and lows and two 1.5-inch speakers for the highs.  There are two separate amps (one for lows/mids and one for highs) inside the Creative Sound Blaster Roar.

The Roar SR20 incorporates far-field high frequency drivers that project audio further than most other speakers in its class.  It is further complemented by the boxer-style layout, which also delivers a room-filling, non sweet spot-specific audio experience. Perfect, when you're lacking in resources and looking for minimal effort to "Work the Room".

The speaker can pair with two devices via Bluetooth for shared goodness, or use the 3.5mm audio input jack, a microSD card slot, or a USB port via a computer (with installed software).  Another clever feature is that the microSD card can be used to record the audio that is being played.  That will make recording your iTunes radio or Pandora music much easier assuming you are in to that type of thing.  There is also another USB port for output so you can charge your phone (or other USB devices) from the speaker. 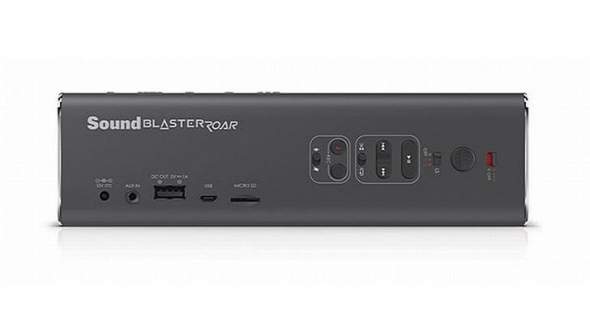 On to the strange bits "“ There is a Life-saver mode which runs in two volumes and will randomly play a variety of sounds.  This is supposedly to keep you awake?  Not sure how that feature made it past a project managers scrutiny.  Another odd feature is a siren feature that plays a police car sounding siren.  This is activated by flicking a switch then holding the alarm button for three seconds.

The battery takes about three hours to charge and will last for about eight hours of continuous play.  You also get a netted carry bag (with hand and shoulder strap) that allows you to attach it to something, say a backpack or fence, and still have the sound come through.

On to the important part, how does the Creative Sound Blaster Roar sound?  Pretty damn good.  Especially for the $199 price.  The Creative Sound Blaster Roar does a great job filling most rooms with clear, loud, quality sound.  The highs, lows, and mids all find their way out of this portable speaker with great fidelity.  If you need a boost in sound you can hit the ROAR button.  Way to go Creative.