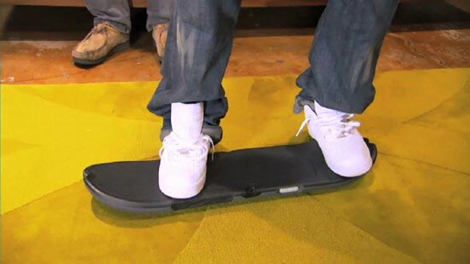 “A special game controller can really make the game. Rock Band has its guitars and drums to make you feel like you’re playing the instruments. Steel Battalion came with a lap-crushing, multi-part controller with joysticks, buttons, knobs and even a set of foot pedals with which to control your giant mech. Even the Wiimote changed the rules for how we play games. Now, Activision and Tony Hawk are teaming up to put out a wireless skateboard controller for the upcoming Tony Hawk: RIDE.

It’s all a little reminiscent of the Wii Fit board, with accelerometers and motion sensors inside the deck allowing players to pull off stunts in the game. The board has buttons along the side of it that you’d have to kneel down to reach, and it’s designed to respond to players grabbing it — making it act much like a real skateboard.

With games such as Skate 2 putting pressure on Activision, is an expensive peripheral game bundle the answer? Arcade games have had board-based play for years, but, at home, I much prefer to sit on the couch and just use a controller. Check out Tony Hawk answering questions about the board in this video.”