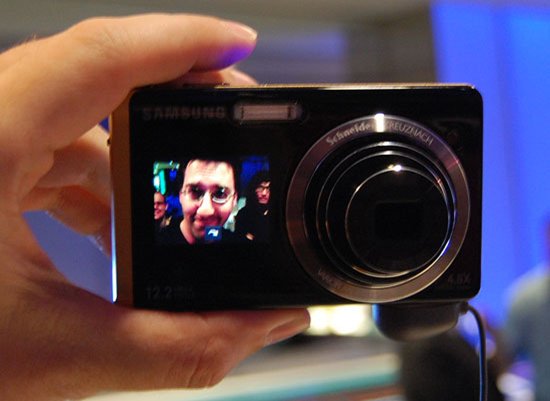 Last week when at the pool there were two, cute, Japanese girls taking thousands (literally) of pictures of themselves.  They were doing the long arm camera trick and doing lame poses on their poolside lounge chairs.  It was annoying as hell to watch… and I would have splashed them if they weren’t so damn cute.  Oh well.  Enough of the ranting… they would have loved the new Samsung TL225 digital camera with a front facing LCD… perfect for egomaniacs.  Details, pictures, and video after the break. 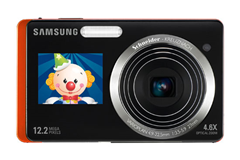 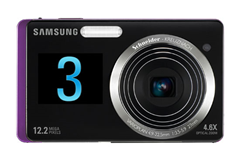 Besides the self-portrait assistance, the 1.5-inch screen will display a countdown for when you don’t want to be holding the camera. It also boasts a Child Mode, which will play vaguely creepy animation of clowns, intended to help get the attention of a small child (the video can be changed).

Samsung made the TL225 simple to use — just tap the front screen to turn it on. The quality of the front LCD is a little sketchy, especially compared to the comparatively glorious 3.5-inch one on the back. But then again, this front screen is really there just to help with composition, not for picture viewing, so that’s OK. Navigating the menus on the backside touchscreen was fairly intuitive; after you’ve used it for a couple of minutes, you’ll be flying.

My favorite extra feature is touch delete: just swipe an "X" over an image during playback, and the camera deletes the pic (don’t worry about accidents; there’s a confirmation screen). The 12.2-megapixel resolution, HDMI output and 4.6x optical zoom are nice to have, too.

The TL 225 will sell for $350. The more affordable TL220, which also has a front LCD, costs $250, but it ditches the HDMI output and takes the rear LCD down to 3 inches. Both models will be on store shelves in September.