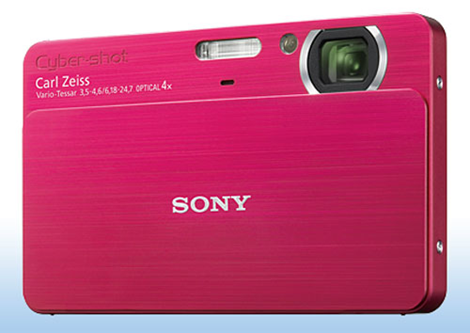 Sony dropped news of two new CyberShot cameras today – the DSC-T700 and the DSC-T77.  Both should arrive in the US by the end of September (Colors are red, champagne gold, and pink for about $400).  The DSC-T700 has a 10-megapixel 1/2.3″ CCD sensor, 4X optical zoom, a 3.5-inch touch screen LCD, 4GB’s of onboard memory, and ISO sensitivity up to 3200.  There are some interesting (weird) new features on the cameras as well… such as scene recognition, smile and face detection, and a “anti-blink” feature that alerts you when the targets eyes are closed.  It will be interesting to see how these work in reality.

The DSC-T77 is almost the same camera, but only has 15MB of internal memory and a smaller touch screen LCD (3-inches), and more colors (brown, green, pink, black, and silver).

Press release after the break. 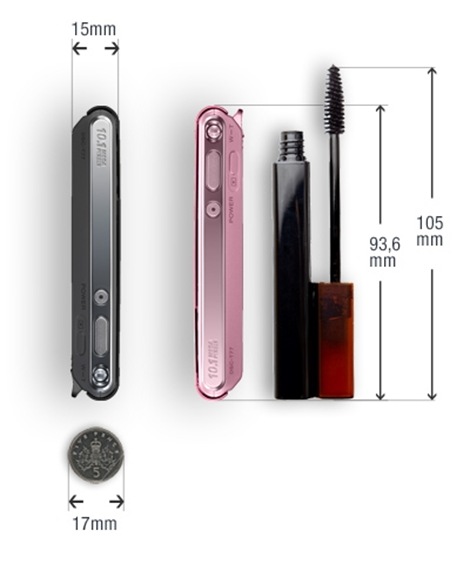 SAN DIEGO, Aug. 6, 2008 – Sony is making the grade with the introduction of the stylish Cyber-shot® DSC-T700 and DSC-T77 digital cameras with “intelligent” shooting functions.

The 10-megapixel T77 camera is Sony’s thinnest model at less than 5/8 of an inch with a 3-inch, 16 x 9 touch panel LCD screen. It features updated intelligent scene recognition technology, Smile Shutter™ and face detection technologies with child and adult priority, as well as high sensitivity shooting (up to ISO 3200), eleven scene modes, and in-camera image management.

The T700 model earns extra points as a “photo album in your pocket.” It has all the features of the T77 unit plus 4GB of internal memory that can store nearly 1,000 full-resolution or 40,000 VGA-quality photos; a 3.5-inch, wide touch panel Xtra Fine LCD™ screen for photo-like viewing (210 pixel-per-inch resolution) with high contrast and wide-angle viewing; and a thin profile (slightly more than 5/8 of an inch) so it can easily slip into a pocket or purse.

“Sony is taking the lead in developing “intelligent” cameras so that taking great pictures is an automatic function and not a complicated process,” said Phil Lubell, director of digital camera marketing at Sony Electronics. “This is part of our effort to enhance the camera experience for customers by offering new functionality.”

While rich in technologies, style was a key factor in the development of both cameras, said Lubell. They feature a newly-developed Carl Zeiss® lens that integrates a 4x optical zoom and Optical SteadyShot™ image stabilization, yet achieves a slim form factor. They will also be available in a wider selection of color options than previous T-series cameras.

This technology also includes a new anti-blink function in portrait mode that will virtually make closed-eyed photos an “old school” memory. The cameras will automatically take two shots and then determine whether the subject(s) have closed eyes using their advanced face detection technology. They will only record images with open-eyed subjects. If both pictures have subject(s) with closed eyes, the cameras will record one and display a warning so you can try again.

Sony’s Smile Shutter technology has also been improved. It is easily accessible as a “smiley face” icon, which is now a permanent fixture on the camera’s LCD screen in record mode, and can be toggled off and on at the touch of a finger. And during smile capture, auto focus and zoom functions are available, as well as the ability to take a limitless number of shots.

Not One, But Two Photo Libraries in Your Pocket

The T700 camera is ideal for anyone who wants to have what Lubell calls “bragging” photos of their kids, pets, vacation or sports highlights with them at all times.

Owing to the model’s internal database, thousands of photos can be searched in-camera by event, date, smile or face, including children and infants; displayed in calendar or chronological views; organized in folders; and shared as slide shows or fun scrapbooks.

Unlike previous models, this one allows you to store and manage images on both its 4GB internal memory and an optional Memory Stick® media card. You can maximize the number of pictures stored on the camera with the bundled Picture Motion Browser (PMB) software application and its new PC Synch feature.

This new feature lets you downsize images from full-resolution to VGA and export them back to the camera’s internal photo album. The application operates intelligently with the camera so you can shoot more photos. It will only detect, downsize and export the new shots. This allows you to store literally thousands of your favorite photos in the camera

It is also possible to export photos shot by other cameras or archived on other media into the camera.

The PMB Portable software inside the camera lets you easily upload photos or videos to popular social networking sites like YouTube™ (a trademark of Google Inc.) using an internet connection with any compatible PC via the supplied USB cable. It even has pre-programmed sites in the camera.

The camera also has a scrapbook function that automatically creates simulated scrapbook pages. Now you can share, print or save your scrapbooks unlike previous models.

The DSC-T77 camera replaces the former T70 model and will be available in brown, green, pink, black and silver in late September for about $300. The new DSC-T700 cameras ships at the same time in red, champagne gold, pink, dark gray and silver for about $400.

All cameras and a range of accessories can be purchased online at sonystyle.com, at Sony Style® retail stores (www.sonystyle.com/retail ), at military base exchanges, and at authorized dealers nationwide. Pre-orders begin on Aug. 29 at www.sonystyle.com.