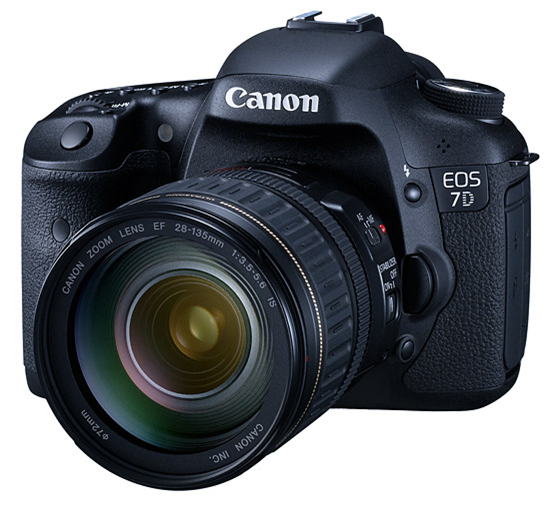 Mini feature review of the Canon EOS 7D Camera after the break.

Canon raised the stakes in the hot digital SLR market with its EOS 7D digital SLR, aimed at high-end amateur photographers and also touted as a second camera for pros. The company says the 7D’s 19-point autofocus system is “all-new,” and Canon’s packed its CMOS sensor even tighter with 18 megapixels. It features remarkably high ISO speed settings, going from 100-6400 with the ability to push that to 12,800. It can fire off stills at eight frames per second, giving you a total of 126 large frames at a time. There’s also a nice big 3-inch LCD viewscreen, three new lenses — including one with the world’s first hybrid image stabilization — and optional wireless file transmission via Wi-Fi and Ethernet.

The camera’s no slouch in the video derby, either, giving you a sophisticated 1080p camcorder on board that will let you select frame rates of 24p, 25p or 30p. Making it actually usable for pros is its full manual control, and the ability to use an external stereo microphone. Canon’s also added a dedicated Live View button for both video and stills, and you use that button to start and stop video recording. Hey, that’ll feel just like a camcorder.

Look for the 7D to go on sale at the end of this month (September ’09). The EOS 7D’s $1699 body-only price slightly undercuts Nikon’s entry into this market segment, the D300s announced a few weeks ago, but the 7D looks like it’s going to whip Nikon’s entry with features that go far beyond the capabilities of the D300s. Whoa. This all-new DSLR is bound to heat up an already hot market segment.