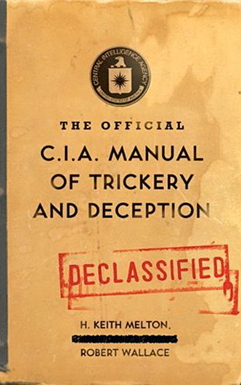 Intelligence historian Melton and retired CIA officer Wallace (coauthors of Spycraft) reunite for this unremarkable reproduction of a long-lost cold war"“era relic. In 1953, the fledgling CIA hired professional magician John Mulholland to adapt his techniques of stealth and misdirection to the craft of espionage. Mulholland produced two illustrated manuals featuring a range of tricks from placing pills into drinks to stealing documents and avoiding detection. The classified manuals were believed to have been destroyed in 1973, but the authors discovered a copy in 2007 among recently declassified CIA archives. The manuals are reproduced along with enhanced illustrations and an extended introduction by Melton and Wallace. Despite the authors’ best efforts to promote their discovery of Mulholland’s work as a rare piece of historical evidence of the CIA’s legacy of black arts, the manuals, with their earnest, how-to descriptions of surreptitiously spiking drinks, palming documents and signaling colleagues with a feather in a hat band seem more quaintly anachronistic than revealing or sinister.