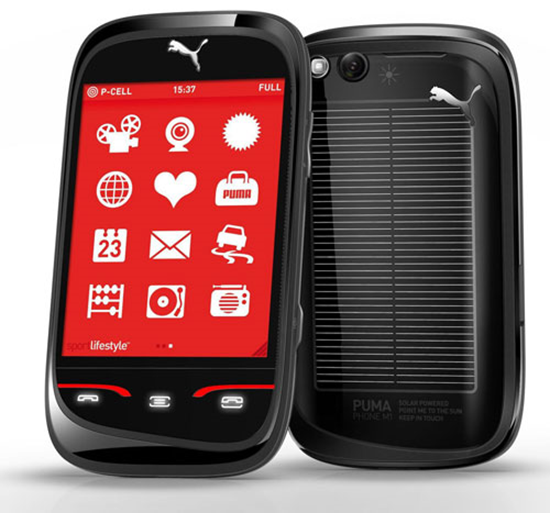 I think I just found my favorite phone (though the HTC Legend comes in a close second) of Mobile World Congress 2010 and it’s from someone completely unexpected: Puma. Yes, the same Puma who makes the shoes, sportswear, and accessories.

OK, maybe I’m just a sucker for a cool gimmick but it’s always nice to see something completely different like the Puma Phone. Plus, it looks to be quite a competent phone and it’s apparent that the company put a lot of thought into the integrated features.

The handset itself is manufactured by Sagem and has a 2.8-inch, 240×320-pixel resolution capacitive touch screen and built-in solar charger on the back. The quad-band GSM device also includes Bluetooth, 3G, A-GPS, and a 3.2-megapixel camera. All pretty standard for a full-feature phone, but it’s the user experience that makes the Puma Phone different.

From the bright red background to the bold icons to the preloaded sports functions, the Puma Phone is designed to complement your lifestyle just as much as it is meant to be a communication device. There’s a host of sports features, such as a run and bike tracker that takes advantage of the GPS capabilities. There’s a built-in radio, a scratching turntable, social networking integration, and video calling. And it’s all done with a cheeky and fun attitude. I mean, the phone has an on-demand digital puma named Dylan. Enough said.

Unfortunately, it looks like the Puma Phone will only be heading to Europe with an expected April ship date. If you like what you see, there’s always a chance you buy the phone unlocked. The handset should go for about $576 (420 euros).