If you have a tough time staying true to your gym membership, get incarcerated at the Tent City Jail in Phoenix. Controversial, and freaking awesome, Maricopa County Sheriff Joe Arpaio, is providing the inmates there with Americas favorite past time, cable television. The best part, wait for it, wait for it, is that they inmates have to pedal a stationary bike that generates electricity to get TV time. 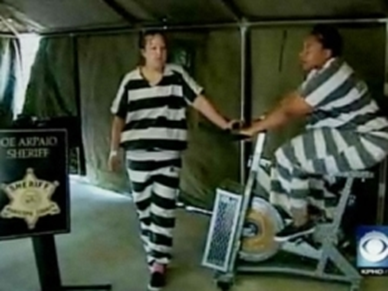 "Arpaio installed an energy-generating stationary bike (PDF) attached to a TV when he found that 50 percent of the inmates were overweight, many morbidly so. As long as an inmate is pedaling, the bike will produce 12 volts of energy–just enough to power a 19-inch tube TV. But if an inmate stops pedaling at a moderate speed, the TV shuts off.

Because inmates can’t be forced to exercise, access to cable TV could provide incentive for them to do so. Female prisoners will test the program first, because they were more receptive to it, Arpaio says.

This isn’t Arpaio’s first attempt to trim inmates’ waistlines. Some years back, he cut inmates’ food intake from 3,000 calories to 2,500 calories. “You’re too fat,” CNN reported Arpaio as saying to the inmates. “I’m taking away your food because I’m trying to help you. I’m on a diet myself. You eat too much fat.”

“America’s toughest sheriff” hasn’t always had an easy time implementing his standards, which have included assembling a female chain gang and making inmates pay $10 every time they need to see a nurse. Human-rights groups consider Tent City jail to be among the harshest in the nation, according to CNN, and numerous civil-rights lawsuits have been filed against the sheriff.

The program that Arpaio is calling “Pedal Vision” might be received with less criticism, though. Watching TV while serving time is a privilege, not a right, so inmates are choosing to take advantage of it. But what if every prisoner pedaled to produce energy? "

I love it, it is prison folks, you are there because you screwed up.  Suck it up and enjoy the TV.