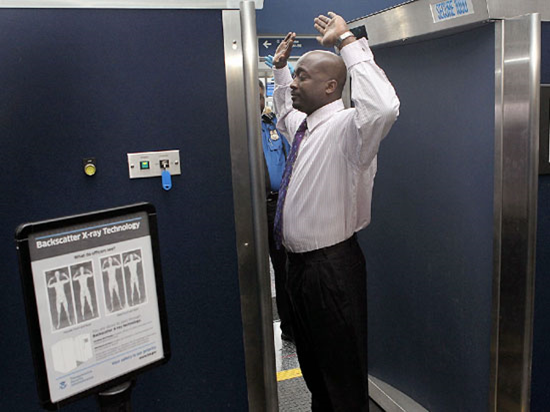 After numerous fake terrorist attempts, you know the ones where terrorist can't seem to light a fuse or figure out how to set a bomb clock, Obama ramped up deployment of backscatter x-ray scanners.  I had the luxury of going through one on my trip to Las Vegas this weekend.  They made me take everything out of my pockets even though none of the items were metal.  There was also a sign saying the dangerous airport scanner was optional and that I could have a full body search instead.  Fun.

"Fifty-two of these state-of-the-art machines are already scanning passengers at 23 U.S. airports. By the end of 2011, there will be 1,000 machines and two out of every three passengers will be asked to step into one of the new machines for a six-second head-to-toe scan before boarding.

About half of these machines will be so-called X-ray back-scatter scanners. They use low-energy X-rays to peer beneath passengers’ clothing. That has some scientists worried."

Read on for details.

"”Many people will approach this as, ‘Oh, it must be safe, the government has thought about this and I’ll just submit to it,'” says David Agard, a biochemist and biophysicist at the University of California, San Francisco. “But there really is no threshold of low dose being OK. Any dose of X-rays produces some potential risk.”

Agard and several of his UCSF colleagues recently wrote a letter to John Holdren the president’s science adviser, asking for a more thorough look at the risks of exposing all those airline passengers to X-rays.

“Ionizing radiation such as the X-rays used in these scanners have the potential to induce chromosome damage, and that can lead to cancer,” Agard says.

The San Francisco group thinks both the machine’s manufacturer, Rapiscan, and government officials have miscalculated the dose that the X-ray scanners deliver to the skin "” where nearly all the radiation is concentrated.

The stated dose "” about .02 microsieverts, a medical unit of radiation "” is averaged over the whole body, members of the UCSF group said in interviews. But they maintain that if the dose is calculated as what gets deposited in the skin, the number would be higher, though how much higher is unclear.

Rapiscan officials declined to comment. Federal officials have prepared a reply, but the UCSF scientists haven’t received it yet. Officials at the Transportation Security Administration and the Food and Drug Administration insist that the dose from the scanners is below negligible.

“An individual would need to go through thousands and thousands of times a year to get to the point where it would even possibly reach the equivalent of one chest X-ray,” says Maurine Fanguy of the TSA’s Office of Security Technology.

Specifically, using the government’s dose calculations, it would take 5,000 trips through one of the back-scatter scanners to equal the 100-microsievert dose of a single chest X-ray.

That’s indeed a low dose. But the UCSF scientists aren’t the only ones who are concerned. David Brenner, head of Columbia University’s Center for Radiological Research, recently aired his worries before the Congressional Biomedical Caucus.

“There really is no other technology around where we’re planning to X-ray such an enormous number of individuals,” Brenner told the caucus and congressional staffers. “It’s really unprecedented in the radiation world.”

Brenner’s name carries some clout, because he served on a small group of experts convened in 2002 by the National Council on Radiation Protection and Measurements to write guidelines for the security scanners. He now says he wouldn’t have signed the report if he had known the X-ray scanners were going to be used on virtually every air traveler.

The scientists don’t all agree on the nature of the potential risks. For instance, the UCSF scientists, in their letter to Holdren, worry about effects such as melanoma, a dangerous skin cancer; immune-system problems; breast cancer; mutations in sperm cells; and effects on a developing fetus. But Brenner doubts that X-ray doses from airport scanners would cause these problems.

If you’re one of those air travelers, understanding your own risk is a tricky exercise.

Brenner says he thinks the danger to most individual travelers is miniscule. But he worries about the unknowns when those very small risks are multiplied times something like 700 million travelers a year.

Recent research, Brenner says, indicates that about 5 percent of the population "” one person in 20 "” is especially sensitive to radiation. These people have gene mutations that make them less able to repair X-ray damage to their DNA. Two examples are the BRCA-1 and BRCA-2 mutations associated with breast and ovarian cancer, but scientists believe many more such defects are unknown.

Children are also more vulnerable to radiation damage, because they have more dividing cells at any time. A radiation-induced mutation in their cells can lead to cancer decades later.

Brenner says the most likely risk from the airport scanners is a common type of skin cancer called basal cell carcinoma, which is usually curable. It often occurs on the head and neck.

The Columbia scientist points out that it would be hard to conceal a weapon on one’s head or neck, so he proposes a seemingly simple workaround "“- avoid scanning the head and neck.

But TSA officials say that’s not practical. Think of the long lines, they say, if the machines had to be adjusted for each passenger’s height."