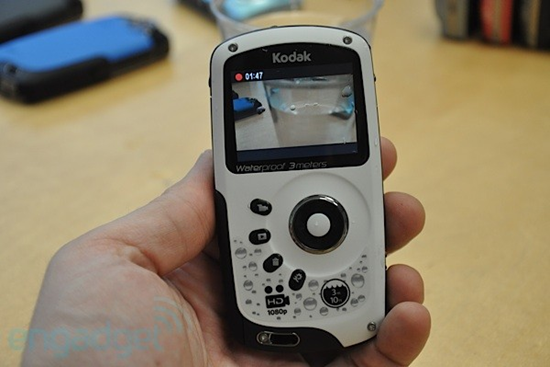 "We have plenty of gripes with the current crop of pocket cameras, most of them to do with image quality: grainy footage, poor (laughable) low-light performance, a lack of autofocus, digital zoom, gimmicky 1080p, and so forth. The new Kodak PlaySport Zx3 HD Waterproof Video Camera solves none of those problems. But you can put it underwater. So, all is forgiven. Follow after the break for our full review."

This might be our favorite pocket camera hardware design yet, for the sheer drop-ability of its build. Kodak has almost completely done away with hard, glossy plastic (outside of a bit near the top, surrounding the lens) and has a soft-touch exterior across most of this camera that screams “drop me on the sidewalk, I promise not to break.” We restrained ourselves, but it’s still a nice confidence booster. The camera also feels better in hand ergonomically than most of these shooters, though we must put in our old person two cents and mention that we still find the process of holding a camera upright in one hand rather awkward for doing video.
Kodak’s biggest claim to fame here is the waterproof design, with some heavy duty locking doors covering over the ports, battery, and SD card. Of course, we didn’t just take Kodak’s word for it: we submerged the camera. Check it out from the camera’s view below.

Pretty thrilling, right? An interesting aspect of the materials of the camera is that it feels almost entirely dry just seconds after we pull it out of the water, and certainly isn’t slippery or even difficult to operate.
Of course, the tradeoff is that you have to open a door to get at any of the ports, and the camera is also restricted from some of the fancier features of its siblings, like external mic input or a macro switch.

Kodak walks the line between the dumb-as-dirt Flip and the overly complicated (for most) Toshiba Camileo S20, with fairly a simplistic and obvious operation, but enough options and buttons to confuse some. Our least favorite part remains the 4-way d-pad, which offers a mystery meat way of operating camera zoom, changing resolution, and switching to stills mode.
When you dive into the settings menu you’ve got about a 50 / 50 chance of figuring out what an icon means, since Kodak has forgone putting words next to the graphics, but luckily there’s really not too much to change from the default.

Remember when we said nothing’s new here? We meant it. The camera offers basically the exact same 1080p image quality of the Zi8 (which Kodak will be keeping around for sale), since it’s built around the same sensor. The biggest difference between the cameras is the macro mode on the Zi8, which we really would have appreciated, and the line-in jack — another big plus for that camera, but which would’ve been a tough fit on a waterproof number like this one.

Overall, you’re getting this camera for its rugged and waterproof aspects, and at those points the camera performs wonderfully. Eventually we hope Kodak starts to innovate in the image quality arena as well, and we sure hope they can manage to avoid the sort of form factor misstep the Flip Slide HD turned out, but for now the company is putting out an impressive streak of wallet-friendly pocket cameras, and the Zx3 is no exception.