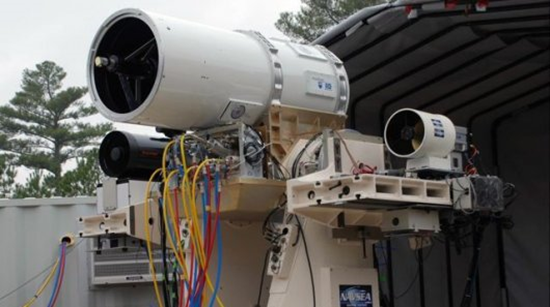 "If you own an Unmanned Aerial Vehicle (UAV), here's piece of advice: don't fly it near San Nicholas Island, California, or it could be blasted out of the sky "“ by a laser. Two such vehicles were successfully shot down there on May 24th by a US Navy laser weapon. According to the official press release, this marks “the first detect-thru-engage laser shoot-down of a threat representative target in an over-the-water, combat representative scenario."

Members of the Naval Sea Systems Command (NAVSEA) utilized a laser shot through a beam director on a KINETO tracking mount, controlled by a MK 15 Phalanx Close In Weapon System (CIWS). The Navy's Laser Weapon System (LaWS) has already shot down UAVs in other scenarios, bringing the total number of downed flying robots to seven."

“The success of this effort validates the military utility of DE&EWS (Directed Energy and Electric Weapon Systems) in a maritime environment,” said program manager Capt. David Kiel. “Further development and integration of increasingly more powerful lasers into Surface Navy LaWS will increase both the engagement range and target sets that can be successfully engaged and destroyed.”

The US Navy is interested in laser weapons because of their speed-of-light engagement time, and the cost savings realized by minimizing the use of missiles.

Laser weapons are also becoming a reality in the air. In testing earlier this year, a modified Boeing 747 equipped with an airborne laser (ABL) shot down a ballistic missile off the central California coast.