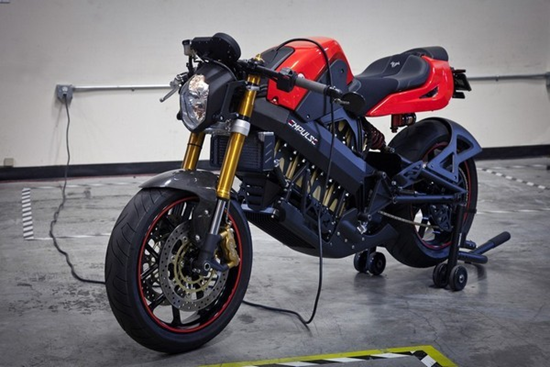 Brammo is moving past their wimpier Enertia motorcycle to a real electric street fighter type motorcycle, the Empulse.  Brammo has been testing their electric concepts at the Isle of Man racing circuit and recently took third place at 102mph.  They basically took the fairing off of that race bike, the TTR, and made the Empluse for general sale.  Details, video, and more pictures after the break.

"The Empulse is a radical departure from the Enertia, indicated by the way the company is promoting the thing. When we test rode that first bike Brammo reps were a little cagey about its top speed, initially indicating it would be limited to 50mph but later saying it’d do over 60 if you pushed it. With the Empulse they’re making no bones about its 100mph+ top speed. That’s hardly world-class in the world of motorcycles, but in the world of electric motorcycles it’s a definite rarity.

So too are the looks. Most EVs look either like experiments thrown together in a garage or an attempt at replicating something from the future. The Empulse has rather more traditional styling, only its inclined array of water-cooled cells sitting where the motor should be plus that unusually large rear sprocket giving away its alternative means of propulsion. The front end looks rather like a Ducati Streetfighter or MV Augusta Brutale. The golden forks, Nissin brakes, and front fender shape are reminiscent of a 2005ish Triumph Speed Triple. The short, wide seat section is, however, unique to Brammo.

There will be three models offered: the 6.0, 8.0, and 10.0. These indicate the endurance of the bikes, with the lowest managing 60 miles of “average range” and the top of the line 100 miles, each of which can be extended by keeping your right wrist in check. The 6.0 will naturally be the cheapest, starting at $9,995, the 8.0 for $11,995, and the 10.0 will go for $13,995. That’s before a whole raft of federal and state tax rebates which should save buyers at least 10 percent and, in some states like Colorado and Oklahoma, could knock multiple thousands of further dollars off the price." 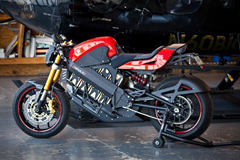 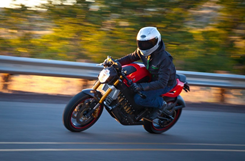 Start saving your pennies and patience as you won't be seeing the Empulse for sale until next summer.