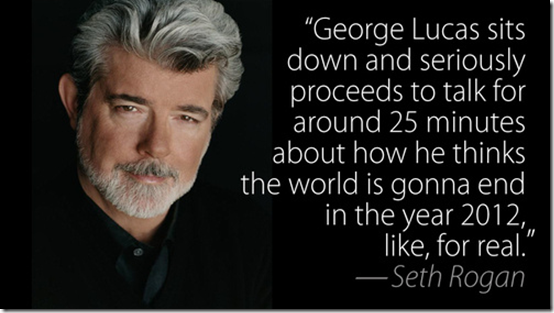 “He’s going on about the tectonic plates and all the time Spielberg is, like, rolling his eyes, like, ‘My nerdy friend won’t shut up, I’m sorry…’

I first thought he (Lucas) was joking… and then I totally realized he was serious and then I started thinking, ‘If you’re George Lucas and you actually think the world is gonna end in a year, there’s no way you haven’t built a spaceship for yourself… So I asked him… ‘Can I have a seat on it?’

He claimed he didn’t have a spaceship, but there’s no doubt there’s a Millennium Falcon in a garage somewhere with a pilot just waiting to go… It’s gonna be him and Steven Spielberg and I’ll be blown up like the rest of us.”