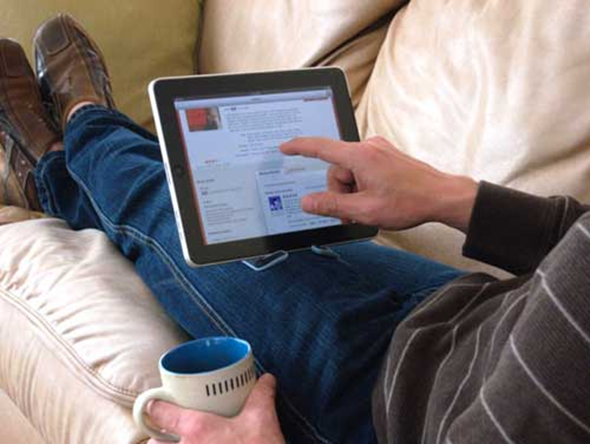 It seems like a lot of iPad and iPhone accessories make it to GadgetKing for review.   The PadPivot from Uifit is an accessory that follows a simple rule: necessity is the mother of all invention.

Anybody who has used an iPad for any amount of time knows that it can get tiring holding it for long periods.  Sounds a tad lame, but try reading an e-book for an hour.  I can’t count how many situations I’ve encountered with the iPad where holding it for extended periods of time got awkward or uncomfortable. The PadPivot solves many of those situations.

I was a little skeptical of the practicality of the PadPivot until I started putting it through use for this review. The first feature I tested with the PadPivot was it’s ability to hold up the iPad for display and play. I put my iPad onto the PadPivot, and then put the set-up on my coffee table to play the Jeopardy app. Both of us could now touch the screen while sitting side by side and also having a perfect view of the iPad screen. This feature also solves another problem we’ve had while traveling with the iPad. We like to watch movies on our iPad while we’re flying, and we’ve usually had to come up with MacGyver ways to keep the screen upright. The PadPivot fixes this problem instantly, and folds up into a compact size that fits in your pocket when you’re finished. The suction plate in the back is also small enough to hold the iPad Mini, and iPhone for the same solutions.

In addition to holding iPad’s like a wide screen, you can also swivel the iPad upright, and have it held perfectly in that position as well. 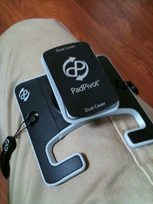 view or use you iPad on your thigh. Great for lying on the couch and using the iPad. I brought in my test mule (Girlfriend) who works at AutoDesk and works on a program called Sketchbook Pro. Many professional graphics artists use SketchBook, and I thought the PadPivot would be a great help while using this application. Unfortunately the strap isn’t very strong and that caused the full size iPad to wobble side-to-side when the stylus touched the pad. If the strap was wider, or doubled-up the iPad would be much more stable for precision art, and architecture apps. Other than that, I love the PadPivot, and think it’s a must have accessory for the iPad, iPad mini, and nice to have for the iPhone.