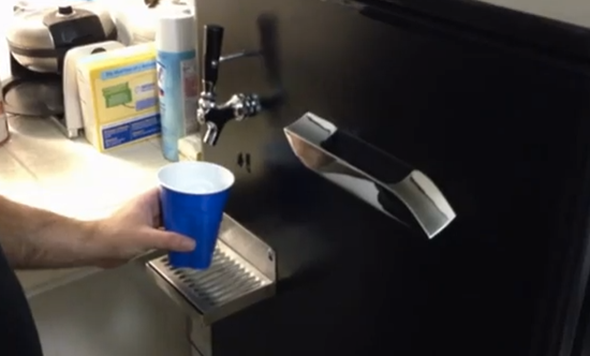 The closures team was tossing out a few old prototype door handles, and I asked if I could have one for a personal project. They assumed I was going to put it on my ’64 Honda project car. I was thinking about modifying the metal part of the handle to replace the tap handle on the kegerator, but since I had the entire mechanism, I wanted to do something that used it.

I hogged out the insulation in the back of the kegerator door and then carefully cut a hole in the front that was slightly bigger than the handle. I clamped the handle mechanism in and filled the void with expanding foam to both hold the handle in and insulate the door.

The mechanism is controlled by an Arduino; I had to wire up and code new controls because the existing electronics networked with other controllers on the car to determine when it could and couldn’t activate. I used an infrared proximity sensor below the spout to present the handle automatically. The dispensing is activated with a linear solenoid hooked up to the spout with a simple pushrod I fabbed up from an old brake line. I tried using a fluid solenoid in the beer line, but it created too much head in the beer. I thought about using a globe valve with a wiper motor or something, but I kind of like the handle mechanism.

I put an extra switch in and coded in some timeouts. I’m always afraid I’m going to come home to a flooded apartment, and a Model S door handle hiding like a dog that just peed 14 gallons of beer on the carpet.