Well, I’ve had my Tesla Model S (85kWh performance) for about four days now and wanted to post my experience to date.  First off, let me say that I love the car and see much promise in the brand and the technology.  Tesla, and Elon Musk, started from scratch with the Model S and have accomplished some amazing things in a relatively short period of time.  Considering the big brands (think Toyota, Ford, etc.) have built up so much knowledge about every aspect of the industry from creating a user interface to building customer relations to the creation of manufacturing, delivery, and sales infrastructures, they are getting outmaneuvered in a big way by Tesla and the Model S.  Kudos to Tesla for this!

Now on to the important bits, let me start off with some of the not-so-shiny aspects of the Tesla Model S experience and I will finish with the things I love (very much).  Keep in mind that I will be updating as I learn more and open issues are resolved.  Read on.

– I picked up the car from the Tesla factory in Fremont on 12/24/12.  It was the best Christmas gift to myself, ever.  Turned out that the car was missing a few items, which would have been nice to know in advance.  Not the end of the world, but frustrating.  There were no floor mats (normally I wouldn’t care about this delay but it happens to be a particularly rainy and wet month in typically-sunny California), no rear cargo hatch cover, the charging cable was missing a metallic piece with the Tesla logo, and the rear carbon fiber spoiler was not installed.  While I am confident these issues will be addressed, it still left a blemish on an otherwise great delivery experience.

– One of the selling points that was reiterated to me on most of my visits to the Tesla dealerships is the fact that I would be able to charge the car, for free, at the dealership 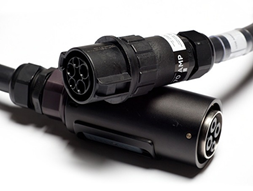 charging stations.  For example, the Santana Row Tesla dealership has two charging stations behind the store.  This appealed to me, as I spend quite a bit of time at Santana Row and would have liked to use this perk.  However, the charging stations are still set up with the large Roadster connectors which don't work with the Model S.  The car doesn't come with an adapter for this connection and the cable costs approximately $650.  Ouch.  This particular dealership has one adapter that they will loan out when not in use, though so far on all of my visits it has been in use to charge their test-drive cars.  So, net-net, no free charging as of yet.


1/1/14 – Well late last year they added another Model S charger bringing it to a total of 2 chargers.  The real news is that the dealer vehicles seem to be making an effort to not charge all day.  They are charging mainly at night.  This means that you I have been able to plug-in from time-to-time.  🙂

– The last few days have been raining and the car has performed well in the wet weather minus one issue.  Both headlights and the rear passenger reverse light (see picture below) have water in them.  There is clearly an issue with the seals on the lights.  I have e-mailed this to Tesla on 12/27/12 and haven't heard back as of yet.  Will update when I know more.

12/29/12 update – I received an email from Tesla and  have an appointment to take the car in for service in Menlo Park on Monday 12/31/12.
– also noticed the silver dealer vehicle at the Santana Row location also has water in the reverse light.

12/31/12 update -  Took the car in for service at the Menlo Park location (I understand they will be moving this location in the near future).  The people were friendly and professional.  The service center was nice and included a waiting area with a window that allowed you to watch your car.  They also provided coffee, tea, and some snacks in the waiting area.  The car was washed at the end of the service visit.  Nice touches.
– The reverse light was sealed.  Will have to wait for rain to see if the fix worked.

1/25/13 update -  The headlights were replaced at the Menlo Park service center. 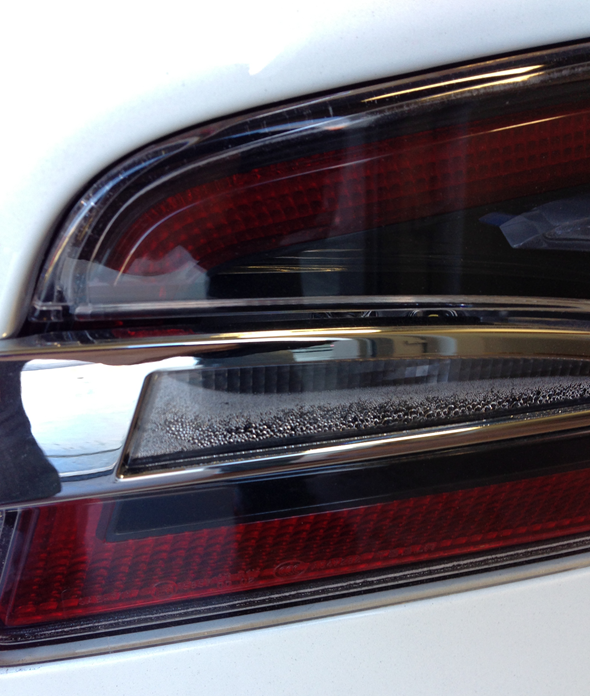 – Fit and finish.  Overall, the fit and finish looks great.  With that said there are a few areas I am concerned with.  On my car, the body trim around the headlights is not consistent from left to right.  One of the headlights is touching the body panel and the other has a gap.  Same thing with the large black plastic “grill” plate at the front of the car.  One side of it is recessed in and the other side is sticking out much further.  Not the end of the world, but it does bring to mind echoes of GM’s fit and finish.  Goes without saying, I was hoping for something closer to Lexus quality, especially given the price tag.  Lastly, an issue which I have noticed on a showroom car is interior wear.  The leather interior panel near the seatbelt wears out rather quickly, in my opinion.  The area in question, pictured below, slopes out of the side wall of the car and is wrapped with leather that has stitching running across it.  I’ve been conscious not to brush against this area getting in/out of the car.  Fingers crossed here.  I was told at the Tesla store that they have already replaced this section in customer cars.

I have contacted Tesla, and Elon, about this issue and their response has been to chalk it up to the volume of people getting in/out of the showroom cars.  If this was the case, customers wouldn't be having the issue as well.  Hope this gets addressed, will update.

12/30/12 update "“ Today, while showing a friend the crooked front”grill” plate I pushed on the side that was sticking out further, and it snapped in to place.  Not sure how to feel about this one.  At least it looks better now. 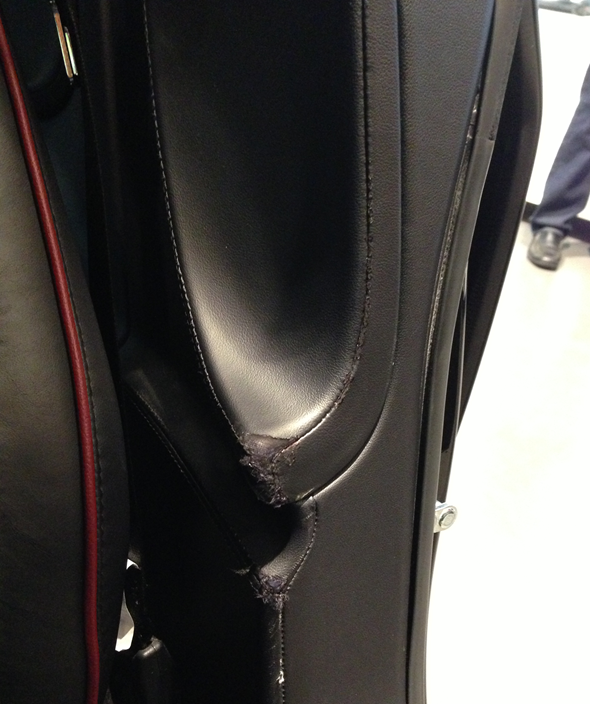 – Software update.  My car has been unsuccessfully trying to download a software update (4.1?) since the first day.  The car is currently set to do this at 2AM and has a failure message every morning ("Unable to start update. Try again later.").  I get the same result when trying to do the update manually. (On a side note, how cool is that there are software updates?!)  I called Tesla customer support on 12/26/12 and they said they would call back.  Will update when that happens.

12/31/12 update – The dealership could not fix this issue on my service visit.  They put me in queue for a software technician to take a look at the fact that software continues to fail update.  A new error message greeted me this morning “Unknown alert msg id 0x5b8 bit 16”, and seems to pop up every time I get in the car now.  The dealership didn’t know what to make of it.  Will wait for more information.  Software update 4.1 seems to have fixed this.
12/31/12 update #2 – The software decided it was ready to update after 8 days of failed attempts.  Took about 30-40 minutes.  Not sure why it took 8 days of failures to finally succeed. 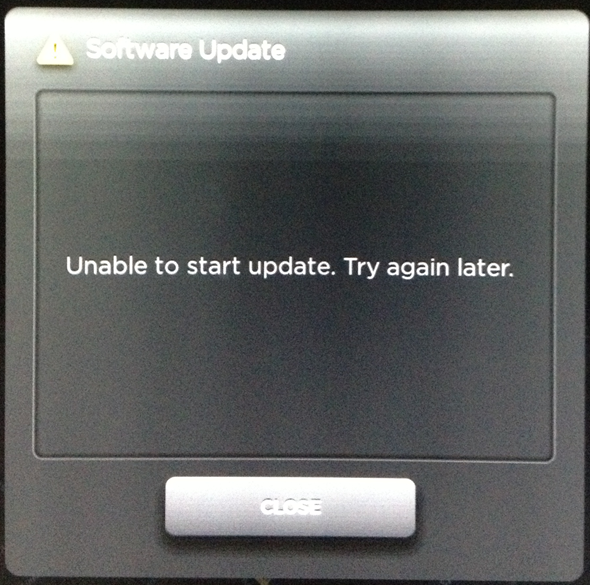 Things That I Love (aka the positives)

– Starting from the beginning.  I received a tour of the factory which was not operating due to the holidays but it was amazing nonetheless.  The factory is over 5 million square feet in total.  Tesla is using less than 25% of this massive facility and has plenty of room to grow.  Pictures were not allowed or I would have shared images of the amazing aluminum stamping machines.  Tesla makes all of their aluminum body panels at the Fremont plant.  The car is as close to a true "American" car as you can get.  I know there are parts from other countries in the mix, but it is a significantly smaller percentage than other American cars on the road today.

– The ride and performance.  The air suspension is firm while still being smooth.  This has to be one of the best handling larger cars on the road.  It’s pretty impressive on corners!  The suspension also has the ability to adjust the ride height, see picture below.  Very handy for steep driveways and car washes.

In terms of performance, it is easier to show someone than tell them.  The acceleration is amazing and instant.  There is no delay waiting for a gas motor to spool up and then pass that power to the transmission.  You step on the pedal and you are pushed back into your seat for a 4.4 second 0-60mph ride.  The instant torque and power from the electric motor makes other cars seem a tad antiquated. 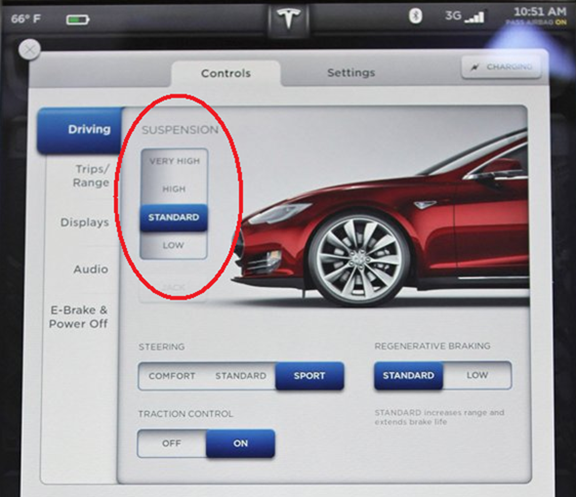 – The huge LCD and controls.  The controls are very intuitive and easy to use.  The closest experience I can think to compare against isn’t to a car, it’s to an Apple iPad.  A new user will have the cars info-tainment system figured out in a matter of minutes without grabbing the manual.  The heads up display is easy to understand and relays a bunch of important information with just a quick glance.  Steering wheel controls are also customizable, like the main screen, to show items like navigation, radio, phone, etc.  Very handy.  Details like the day/time/date, outside temperature, power usage, and range are quite nice. 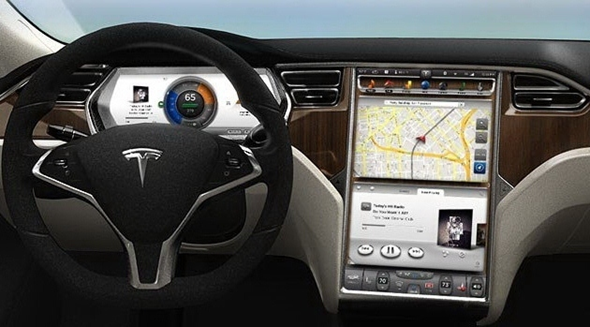 A word about the overall UI. The learning curve is non-existent. By that I mean, the car pretty much does what you want, and expect, it to. Want to peer in the window to see how far the charge is?  Go ahead and lean in (with key in pocket) and the driver-side display lights up to show you its progress.  Directionally challenged and need to go full-screen on the map?  Done.  Or maybe you’re a human compass and would rather display your music and surf the web instead… done and done.  Ambient lighting is done well, as is the feedback that the charging port gives you in the way of various pulsing lights to let you know it’s doing its thing.  You know that little battery icon on your phone that shows you how charged it is?  Model S has one, too, and if you tap it, wonder of wonders, it brings up the main battery screen.  We may take these small conveniences for granted, having been jaded by our iPhones and iPads, but making UI intuitive is not easy, and the engineers at Tesla are really paying attention.  As I mentioned above, one of the coolest features of Tesla, in my book, is the fact that they can continue to tune and push updates out to you.  The way I see it, my Model S can only get better.

– The looks.  Come on, what’s not to love.  The car looks great from all angles.  Unlike the Fisker Karma which has a good angle or two, the Tesla Model S is a subtle beauty from all sides.

– The charging options.  It is nice that the car comes with a few charging adapters which will make plugging in to a standard wall outlet, 220V appliance adapter, or a generic J1772 adapter easy for the user.  No need to install a custom charger if you don't want to as the car has a built in charge controller.

– The range.  There currently isn't a better all-electric option on the market in my opinion.  I simply couldn't purchase a car that got 70, 80, or even 100 miles of range on a full charge.  I realize most daily commutes are covered with the lower range cars, but some days require more range.  I wasn't willing to settle on this one.

Despite a few open issues, I love the car.  Come back for updates on future discoveries and software updates, etc.  Go Tesla!

20 Comments so far. Feel free to join this conversation.