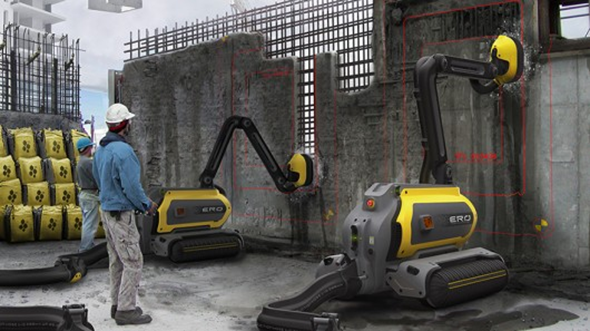 When it it is time to demolish an old building, contractors have quite a few techniques they can use.  Some of the options for demolition include explosives, cranes with wrecking balls, bulldozers, etc…  While they get the job done and scrape the building from the location… they don’t make recycling of the old materials very convenient.  Omer Haciomeroglu of Umea Institute of Design has created a demolition robot which recycles as it goes.  This robot, named ERO, uses high pressure water to remove concrete from the rebar framework.

This concept demolition robot is a big deal on quite a few levels.  Without going to deep into the savings this ERO robot creates… One, it should be more efficient in that it requires less energy, makes less noise, and also is less messy.  And, two, it recycles the concrete with its water-jet/vacuum head.  This type of demolition will essentially erase the building, floor by floor. 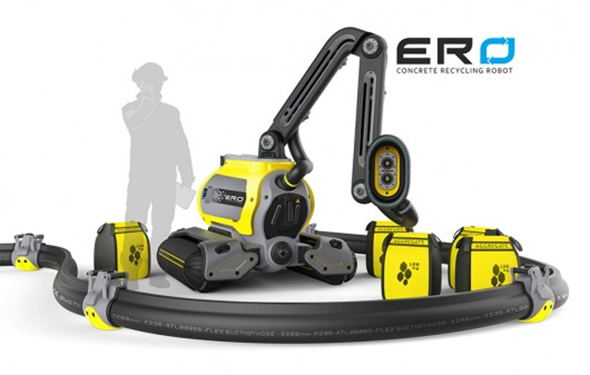 ERO is a winning concept design in the Student Designs category of the 2013 International Design Excellence Award and replaces several machines with a single autonomous robot type. It demolishes buildings by eating or "erasing" them section by section and layer by layer with an articulated arm equipped with a water-jet/vacuum head.

In operations, a fleet of EROs would be be deployed at a demolition site. The robots would move about on omni-directional tracks developed by Osaka University. These are cylindrical treads that propel the robot forward and back like a caterpillar tractor or rotate on their axis to make the robot crab sideways. According to Haciomeroglu, this allows ERO to dispense with hydraulic stabilizers and simplifies design.

The robots would scan the site, plan out their own routes, and then fan out to erase the building. They would do this by means of hydro demolition. This is a technique currently used for repairing reinforced concrete structures. EROS uses high-pressure water jets to hammer into the cracks in the concrete, pulverizing it and stripping it away by means of a vacuum system. What's left is clean rebar that even has the rust stripped off. The more or less intact steel can be easily cut up for reuse or sent off for scrap.

Meanwhile, the water is recycled by a centrifugal decanter to separate it from the solids and the stripped concrete is separated into aggregate and cement and bagged by ERO, while turbulence dynamos reclaim part of the energy used in the process. The resulting bagged and labeled material is sent directly to concrete pre-cast stations nearby to produce new building blocks.