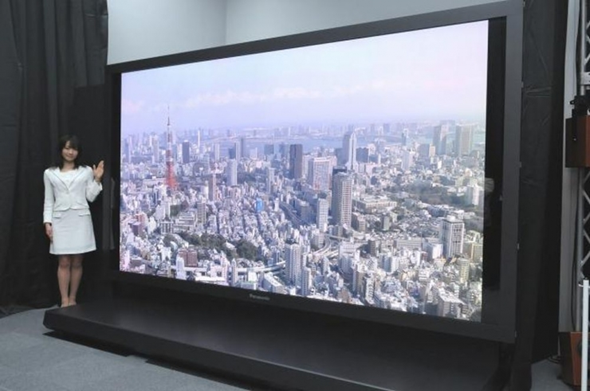 Just when you were feeling all warm and fuzzy about the purchase of your new 4K TV, you start hearing about 8K TV.  Yep, Japanese broadcasters at NHK are testing out 8k TV (aka Super Hi-Vision).

In a test by Japanese broadcaster NHK, an uncompressed Super Hi-Vision signal was sent about 17 miles over the air to a receiver, while occupying just a single UHF TV channel. That’s quite a trick when you consider that the 7,680 by 4,320 pixel 8K image has four times the resolution of 4K video, and 16 times that of the plain old 1,920 by 1,080p HD video we get from Blu-ray discs. Put another way, Super Hi-Vision is equivalent to about 60 32-megapixel photographs being sent every second. As if that’s not enough, Super Hi-Vision also has the capability of doubling the frame rate to 120 frames per second, and also comes with a 22.2 channel audio soundtrack.

Not to worry though, word on the street is that it will take a while for this technology to make it to the commoner.  Broadcasters are still working on their 4K streams and manufacturers wont want to cannibalize their 4K hardware just yet.