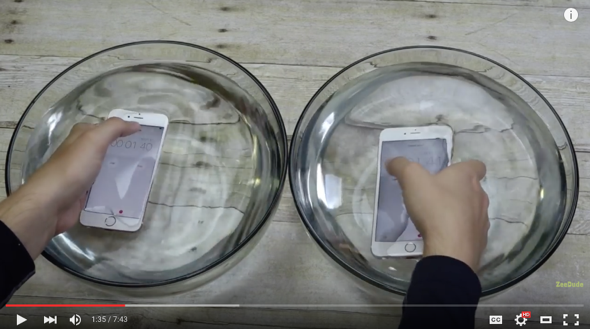 So, apparently some folks have noticed that the iPhone (while not listed as waterproof) seems to hold-up pretty good living in a bowl of water. So are the new iPhone 6S and 6S Plus waterproof? Read on for details and video of the iPhone 6s and 6s Plus taking a bath after the break.

Apple has been known to sneak features in without telling the world. They just quietly improve the product and users figure it out down the road. Well a dude named Zach put the new iPhones in a bowl of water and timed the event to see how long they lasted. Spoiler alert, he gave up after an hour, but the phones were still working fine.

Did Apple spray the 6S and 6S Plus guts with a hydrophobic coating? Or is it the new rubber adhesive seal around the LCD that is shown in the DirectFix iPhone 6s screen replacement video below?