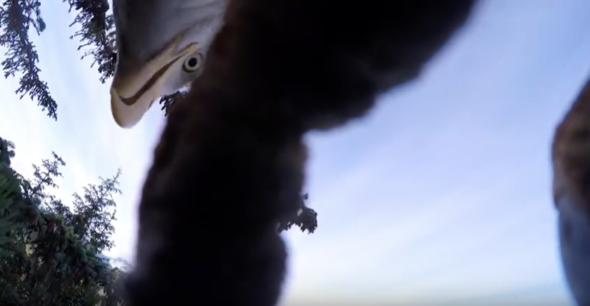 This video surfaced at the GoPro Awards and shows a crafty bald eagle stealing a camouflaged GoPro camera. The Camera was set up by GlacierChange researcher Matt Beedle in Juneau, Alaska where he was trying to get videos of bald eagles feeding. He got that, and more. Video after the break.

After over an hour in the tree searching branches, the camera still alluded him. On the way back down he shook each branch hoping it would fall and his dad would see it hit the ground. Matthew’s dad had him toss an extra carabiner down to get an idea of where the camera might have landed had it been shaken loose. The plan actually worked; he searched again found it nestled out of immediate view.