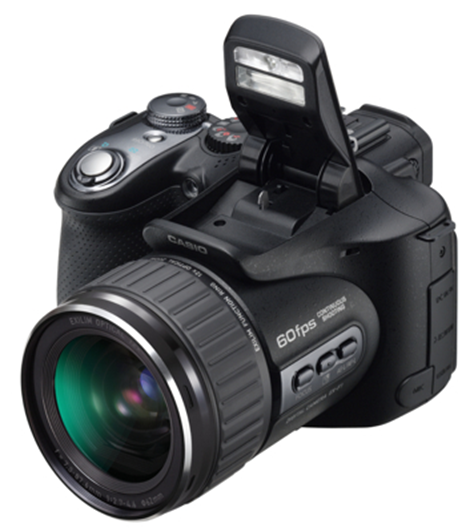 I read the New York Times article about the Casio Exilim EX F1 Pro (CAEXF1), and decided I had to have one. I was right. The thing is amazing, if you are a tech type person. You won’t like it if you are a Photographer, or a home cinematographer. The thing is that this is the ultimate camera for the Myth Busters, not for “Normal” people.

The 6 MegaPixel images look nice, but not up to snuff with a DSLR of the same price. And the HD-Video is nice, but at the expense of being in MOV container, and that you can’t adjust the display so if you want to shoot with the camera anywhere but up to your face, you can’t.

All that said this is an amazing piece of tech. I’m posting videos from my first day of shooting, as I write this to MetaCafe, and even a simple flush of the toilet, looks cool slowed down. Read on for full review.

The Casio Exilim EX F1 Pro is pretty straight forward. The Manual could be a bit more in depth about what the pictures on the top dial’s mean but for the most part things make sense.

Getting through the menus takes more button pushes than I would like but it was not bad, and the menus make sense the settings are hidden in obscure places.

The CAEXF1 comes with a remote so that you can take pictures with out touching the camera, great for getting better results on a tripod as the camera isn’t disturbed by the shaking of touching the shutter button, but oddly there is no way to trigger video recording with the remote. I found this disappointing since I am planning to use this camera mostly for High Speed shooting.

While not “heavy” the optics on this camera do make it much heavier than an equivalent Video Camera. You are not going to use this with a steady cam. It is substantial enough to be steady in the hand, with out being so heavy as to be a burden to carry. This is not meant to compete with the Elph or other point and shoot pocket cameras, but again for the size there are much better still cameras out there.

The 35mm lens works with most lens that you’d find on the market, so that is a good thing. Unlike my Panasonic which required a step up ring so that I could even attach a UV haze filter.

The HCSD cards are a standard, and my personal favorite.

Images can be shot in RAW or JPG, which are both handled well at this point by most editing software.

Movies are in Quicktime MOV format which is not handled by most of the PC software out there. Previewing the clips in VLC works well, but I’m not yet sure how I would edit multiple videos in to one file efficiently at this point.

Toilet Flush Caught on High Speed – The best video clips are right hereFit and Finish:The Exilim looks like a professional camera. I would not feel out of place taking images on a red carpet with this camera.

This camera is not for everyone, but there are some places it would really shine.

Paparazzi: The ability to shoot in chasing slow motion is great. You point shoot and when the shot you want appears you click again and you can save either the shot or the series. Perfect for the paparazzi looking for the nipple slip, or upskirt.

Sports: You never know exactly when to click to get that just after impact shot of a kick off, tackle, pitch, or slam dunk, but if you only have to be accurate with in a second or two that gets to be a lot easier, not to mention capturing High Speed to see just what happened at better than slow motion. I would think every Golf Pro on the planet should have one of these for analyzing clients swing.

Olive Oil in Water Caught on High Speed – The most amazing bloopers are hereNature Photography: While the indoor and low light response of the Casio Exilim EX F1 Pro leaves a bit to be desired, outdoors in full light it performs well, and the camera has a sit and wait for motion feature so you can set it up come back in 8 hours and see the wild bore, big foot, or red neck that has been trampling your flowers.Cinematographer: This can’t be your only camera, but if you are shooting at 1080i and you have a shot coming up where you want it to be just beautiful for a moment… Like the 2 seconds it takes for a motorcycle to come around the corner, or your hero bursts through a window, shooting 2 seconds at 6 megapixels 30fps uncompressed can be a an impressive way to make a shot that you only get to do once look great. (you will have to get your audio off of some other camera, as you only get audio if you are in video mode)

Overall… this is a great second camera. Lots of people will find reasons to be very happy with this camera as a supplement to their other cameras, but most of us can’t get two cameras, so if you are only going to buy one camera…. Make sure you use case matches the features of this camera.