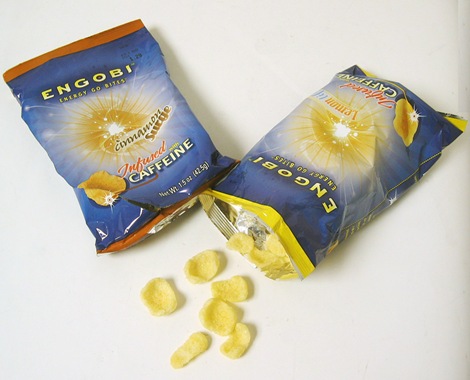 Hello, I am one of the test monkeys and occasional writers at GadgetKing. I was given a pack of “cinnamon” ENGOBI and a pack of “lemon” ENGOBI and was told to try some and pass some around to my cohorts. My overall first impression is someone sprinkled a bunch of crushed caffeine pills over some cereal, once these things melt in your mouth a second wave of “flavor” will hit you – the after taste is that of chemicals and ummm EVIL. 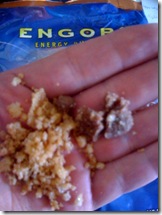 As far as caffeine goes, I am sure it does have loads, you can taste it all the way, in fact I “tested” this stuff 15 minutes ago and the “taste” just keeps on giving.  As far as my co-workers go, it’s sufficient to say I lost friends over this. One of my innocent victims was on the phone when I slipped her the bag, she reluctantly popped a chip, and then her face contorted – first thing she said was “I thought we were friends”, she then hit the water bottle like a person who just came out of a desert. BTW my boss just called me and showed me the glob of brown stuff from the bottom of the bag – WTF?! But I will say it again, there sure as hell caffeine in those chips *twitch*.

7 Comments so far. Feel free to join this conversation.