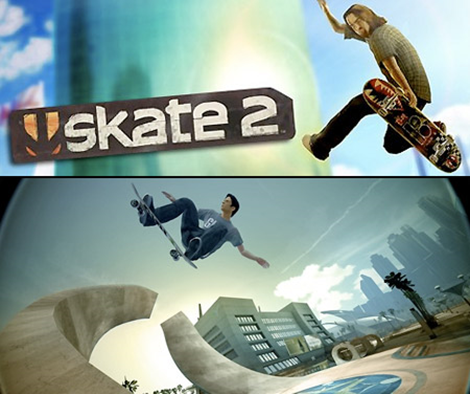 While there have been a number of additions to the formula to add in things that gamers really wanted to see after playing the first one, like hand plants, it’s clear that Black Box was sticking closely to the "if it ain’t broke, don’t fix it" rule.

After all, Neversoft had been trying to reinvent its Tony Hawk franchise almost every year and it had long been having a hard time making many of the new directions for the series stick.
What we’ve wound up with then is a sequel that in many ways improves upon and even fixes elements from the first game, but at the same time doesn’t feel as fresh as it could. It also is a little disappointing in the spots were improvements weren’t made, especially with regards to things like the story presentation.

Let’s start with the new control options. As mentioned, the core Flickit mechanics have remained exactly the same, with additions coming as just that rather replacements. The result is that veterans of the first title can hop in and immediately begin tearing up the city like before. Once you decide it’s time to try out a hand plant or grab during a grind, you can fit those into your repertoire quite easily.
Do these additions drastically change the game? No, not really. Hand plants are a great addition simply because they’re a major part of skating, but foot plants, hippy jumps and the like are all just nice to have, but not necessary. In most of my time with the game, I found that I needed to remind myself to try these out to keep them being used. Otherwise, I pretty much stuck with what I had been using the first time around and I was perfectly fine with that.
While most of the new moves work as expected in theory, not all of them work as smoothly as I would have liked to have seen. Hand plants work great when you’re hitting the top of a quarter-pipe, but if you’re trying to air off a ramp and plant on something higher, like a balcony, you’re going to run into problems as it gets really touchy in these cases. Likewise, you can stick out one of your legs during a grab now, but your skater is rather slow to do so. Unless you catch a ton of air, you’re going to have problems pulling this off.

New control options don’t end with the trick set. You can now get off your board and explore San Van on foot, which is great for getting up a set of stairs quickly or staying still so you can look around and plot your next line. Getting off your board also enables you to move bits of the world around, which is perhaps the biggest addition to the franchise this time around.
Moving objects around and setting up your own line is great, but moving your skater around on foot is borderline terrible. The camera is janky and your movement is so stiff and unnatural that you’re almost always fighting the controls to get your skater to do what you want him to. While it’s kind of easy to line up objects exactly where you want them, just getting your skater to be in the right place to grab said objects can be a pain. Really, it’s hard to believe that something that seems as simple as character movement was implemented so poorly. It’s obvious this is a side effect of how the controls were set up for on-board action, but a bigger effort to separate the way the engine handles being on the board versus off of it should have been worked on.

The actual part manipulation is largely great, however. You’re only able to move things that make sense, so while you can push and pull small ramps, benches, picnic tables and large trash bins, you can’t move cars, bus stops, large bandstands or anything else like this. Fortunately, the game doesn’t require that you do this too often, and when you need to, how you go about it is usually somewhat open to your own ideas.
As far as permanence, there are a couple cool ways this was handled. Firstly, if you put an object somewhere that isn’t too screwy, it’ll stay there. If you put a ramp in the middle of a street, it’ll get removed when you leave, but if you move a bench next to a building, you’re probably fine. You can also add any object to your current session maker. So if you move a ramp somewhere and add it to your marker, if it happens to get bumped or moved, once you reset to the marker, the ramp will go back as well. If you change your session maker, you need to go re-add all of the parts, but it’s cool that this can happen.

If you put objects someplace stupid, like at the bottom of a pool, you can go near it, select the object and reset it to its original location. This works really well except for the times when an object winds up someplace that you can’t reach, like down the side of a hill. In these cases, if you really need that bench, you’ll have to get inventive about how to reach it without bailing in order to reset it, which in some cases can be quite difficult.
Object movement extends to creating your own spot. Once you’ve put a bunch of stuff where you like it, you can open up the Create-a-Spot editor, manipulate a large highlight zone to set your spot, skate it to set the score and upload it for other people to try. This addition is especially cool, though the interface is a little wonky. You can’t move, scale and rotate at the same time – you need to page through the commands in a menu, including switching between left/right, up/down and forward/backward scaling. So, it’s not nearly as intuitive as I would have liked, but the end result is really cool.
Speaking of customization, the replay/film editor makes a return of course, with both pluses and minuses over last year. On the plus side, you now have two additional cameras to use – a tripod that stays put but centers its view on your skater, and a freeform follow camera that moves along with your skater but that you’re able to place at any angle around your skater.
On the minus side is that the film effects are gone. By gone I mean not included on the retail disc and instead sitting there waiting to be purchased as DLC. I haven’t been able to see how much is included there yet (hopefully it’s more than last time at least), but the fact that you now need to pay for something that was "free" the first time out is really stupid. I don’t want to go off on a tangent here, but isn’t the trade-off between perceived value of the game and the EA brand as a whole not worth however much is going to be made from the downloads of this? Also, the online videos won’t be quite as cool as they could be, which you figure would hurt those on-the-fence sales for people who use the video browser as a way to decide whether to get the game or not.

Like last time out, pretty much the entire city is open from the start (with a handful of locked skateparks as the rare exception), and your skater starts out as good as he (or she) will ever be. This formula remains fantastic, allowing you to pretty much ignore the goals and story stuff and just go around and skate to your heart’s content.