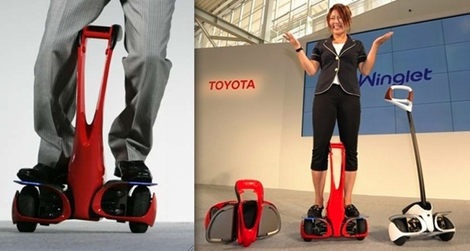 As if Segway wasn’t lame enough, Toyota joined the lineup of Segway’s knockoffs with a gimp little entry called Winglet. Winglet sounds more like a Maxi Pad knockoff for tiny cooters but I digress. Since Sony scrapped most of its robotics division (yes kids they shot Aibo the dog), Toyota stepped in and picked up some of the bits. If Segway was a Ferrari, Winglet would be a Yugo – its top speed is 3.4mph, but you do get the same undeniable douche bag-geek-factor look and feel while riding it. From the video, looks like if you aren’t embarrassed to walk next to a person on a Winglet, you have to walk SLOWLY. Why oh why?!

Video After the break.