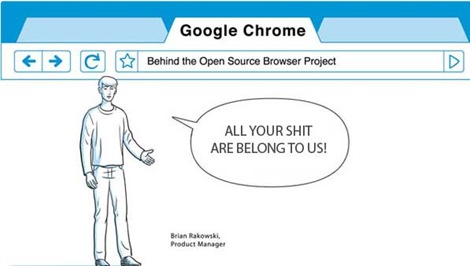 Yesterday, the much touted Google Chrome launched,  like a firestorm, spreading through the nerd online community. Today is the “morning after” people waking up to some sobering “coyote ugly” realizations about Google. Most people clicked past the “I have read and accept the Terms” without ever reading the EULA, not realizing they just gave three drops of blood to the Devil. It would appear that Googles EULA contains some “fun” language such as :

“By submitting, posting or displaying the content you give Google a perpetual, irrevocable, worldwide, royalty-free, and non-exclusive license to reproduce, adapt, modify, translate, publish, publicly perform, publicly display and distribute any Content which you submit, post or display on or through, the Services.”

Got that kids? Technically they aren’t saying they OWN your shit, but they can screw with it any which way they please making YOUR ownership pretty much worthless. Does that seem like a bit of a departure from their “Don’t be Evil” motto? Personally I wasn’t expecting much different from a company that got bankrolled by the CIA.