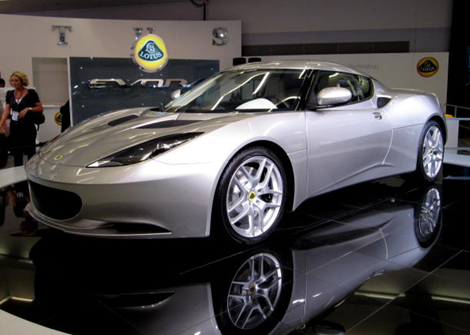 Lotus apparently realized that they might gain more customers if you didn’t have to be under 5-foot tall to get into their car… I mean honestly have you ever tried to get into a Lotus Exige or Elise?  I am 6′ 3" tall and even if I wanted to buy a Elise or Exige… I just can’t do it.  Kinda like trying to stuff a marshmallow into a piggy bank.

Enough of that… the new Lotus Evora is a bigger and more powerful vehicle.  The typical Toyota 4-banger has been replaced with a (yep Toyota) 3.5-liter V-6 which makes 276 horsepower at 6,400 rpm and 252 pound-feet of torque at 4,700 rpm.  Not bad for a car that weighs less than 3000 pounds.  The car is still in the testing phase but should be able to hit a top speed of 160mph.