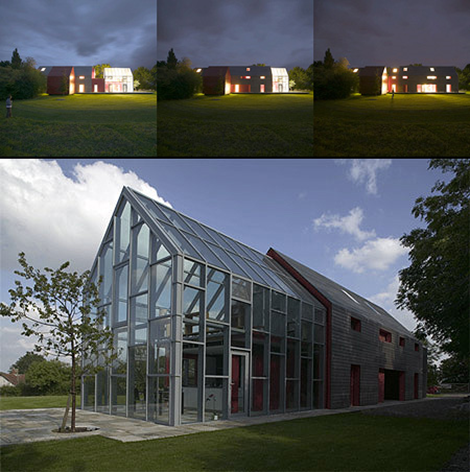 Designed by Architecture firm dRMM, the outer wall of the house moves along a 28 meter track and can sit over any part of main house’s 16-meters linear frame, or move to cover any part of the 7-meter annex, or the open space in front of the 5 meter garage. A greenhouse looking structure is part of the main house, but is built in such a way that it almost looks like its own entity.

The outer wall weighs 20 tons and can move across the entire track in about 6 minutes. The movement is made possible by 4 motors on wheels that are hidden inside the outer wall. They each use two DC car batteries that are recharged by solar panels.

And the tracks can even be extended so that the outer wall can cover a future swimming pool. The price wasn’t disclosed, but I’m willing to wager that someone sold their soul to move into this house. Be sure to check out even more pics over at Dezeen.

See a video of the house in action after the break.