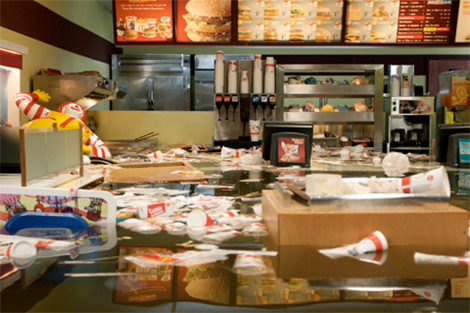 Not exactly a gadget… but a bunch of gadgets got wet and ruined.

This is what passes for art in Europe… Bunch of “artists” pissed away a bunch of money building a replica of McDonalds, flooded it and filmed the results. The only thing more retarded than the project itself are the pretentious and trite reviews it got from London’s media. Idiots still haven’t learned from Hollywood, that before you flood a McDonalds you need to have a gunman go ape-shit in it, then set it on fire, and only then flood it… Amateurs!