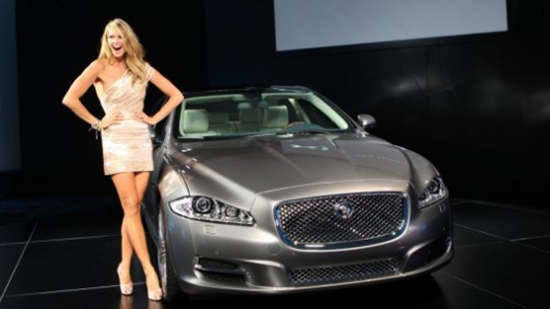 Jaguar has started showing off their new flagship XJ four-door (and a very happy car babe).  More details after the break… but the important bits are, many engine options including a 470 bhp supercharged V8, an economical diesel, a long wheel base model, a short wheel base model, a panoramic glass sunroof, etc…

As predicted, the car follows the front end styling of the C-XF Concept very closely. It looks more aggressive than the XF – while I like the production XF, to me this is 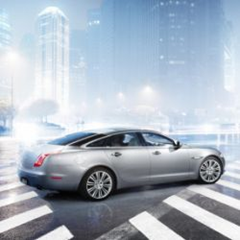 better looking. An interesting fact about the C-XF Concept is that is was designed after the production XF was already signed off – in other words it’s a further evolution of the new Jaguar design style.

No one could have quite predicted what happened out in back though. I do see vibes of the Lancia Thesis, however the design is really unlike any other. Nothing  immediately identifies it as ”Jaguar” and it doesn’t look copied, but yet it fits entirely with the rest of the design. Some say the rear view is the car’s most unflattering. I like it, and I think it stands 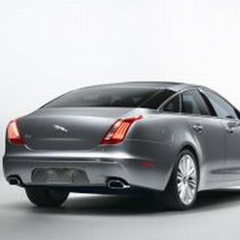 out. It has a rakish roofline, accentuated by the blacked out pillar. I’ve heard criticism of the blacked out pillar as a bad design element; I think it adds character and uniqueness to this design. Probably would look better if the car was all black in color though. Jaguar will most likely offer a package that deletes that, but that is just speculation. For those that don’t like it, remember-  cars nearly always look better in person! Stay tuned for the next portion of the Jaguar XJ Review, covering the interior and powertrains on this new super sedan.