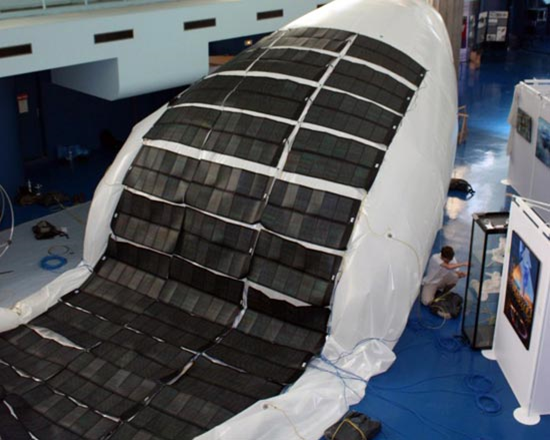 A group of French engineering students have crafted a helium filled 2.4-kilowatt solar blimp, dubbed the Sol’r.  They would like their first long flight in the one man blimp to be across the English Channel.

The 22-meter-long blimp (about 72 feet) is made from nylon and polyurethane and covered front-to-back in semi-flexible solar cells. The great thing about a blimp’s natural shape is that it allows the panels to cover a large area in all directions; as long as the sun is out, there will be a solar cell to collect the energy. Oh, and in case you were wondering, the difference between a blimp and a zeppelin is the rigid frame. Blimps lack a frame, making them lighter, while the zeppelins of yesteryear used large steel frames with bags full of hydrogen gas.

The solar cells generate 2.4 kilowatts of power, driving a small motor which turns two small propellers. The Sol’R team estimates it makes enough power to get a single person across the channel. Project Sol’R is following in the footsteps of Louis Bleriot, the first person ever to cross the English Channel. He flew from Les Barraques, France, to Dover, England, in his self-named plane in 1909. Unlike Bleriot, who was competing for a 1000-pound prize, Project Sol’R has no commercial or military plans for the blimp.
Well…why not? According to the team, this blimp should make the entire trip without emitting any harmful pollutants. It can reach a maximum speed of 25 mph too, which, while it isn’t Concorde-jet fast, isn’t too shabby either. The Goodyear Blimp has a top speed of just 53 mph in zero-wind conditions and can usually cover about 300 miles in 8 hours.