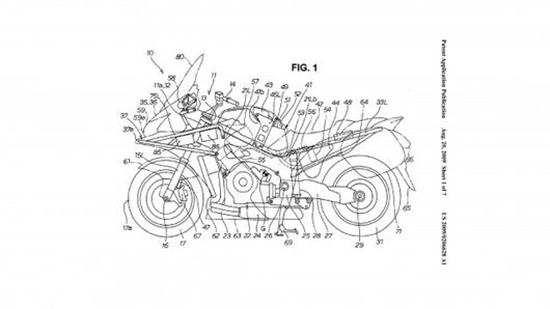 Unusual styling isn’t just for show "“ it’s there to keep you alive The oddball styling of Honda’s forthcoming VFR1200T tourer isn’t just the result of a designer’s whim; the shape is designed to radically reduce rider injuries in the most common sorts of accidents. The appearance of the touring version of Honda’s fourthcoming V4 has already been revealed in design patents which copyright the bike’s styling, but for the first time we’ve managed to dig beneath the skin and discover that the looks aren’t simply there to catch buyers’ eyes. In fact, they’ve been dictated by the technology underneath.

The most attention-grabbing element of the new machine’s appearance is the elongated “chin” beneath the headlights "“ a design cue that harks back to Honda’s X-Wing concept bike of 1999, and one that was originally believed to be created for aerodynamic reasons. But the true reason for its existence is that it’s the first ever car-style crumple-zone to be incorporated into a motorcycle.

The body panels hide an aluminum structure that bolts to the frame rails behind the steering head and extends almost as far as the front edge of the bike’s front tire. So in a frontal impact, it will hit at the same time as the front wheel, helping absorb the forces.

And its safety purposes don’t stop there. As well as spreading out the impact forces, its position "“ intentionally well above the bike’s center of gravity "“ means that it completely changes the behavior of the bike in a crash, particularly the typical impact caused when a car pulls out into a rider’s path.

When a conventional bike’s front wheel hits an object like the side of a car, the bike’s natural tendency is to pitch forwards, as it’s center of gravity is higher than the impact point. As a result, the rider is thrown forward. If you get lucky, you’ll be pitched over the car, but all too often that means the rider hits upper part of the car almost as soon as the impact occurs, with very little of his momentum being absorbed by the bike. 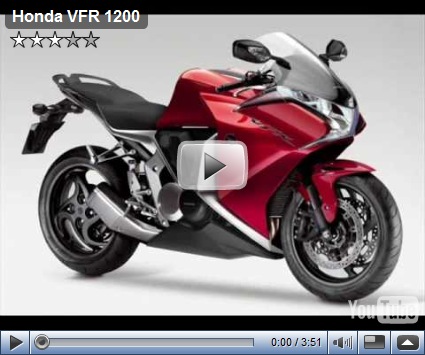 Honda’s solution means that when it hits an object like a car, the bike won’t pitch forward; the new upper crash structure acting as a brace to keep the bike level with the rear wheel on the ground. So instead of being thrown upwards, the rider will continue traveling straight forward. On a normal bike, that would simply mean you’ll go straight into the fuel tank and bars, a prospect that’s no more attractive than being thrown over the top of them. But that’s where Honda’s next safety innovation "“ in the form of the company’s second-generation motorcycle airbag system "“ comes into its own.

Triggered by sensors in the forks and the front crash structure, the new airbag, which is a development of the design already seen on Honda’s Goldwing, inflates in a matter of milliseconds, providing a soft cushion between the rider and any of the hard parts of the bike that might otherwise cause injuries.

The pictures here, taken from Honda’s patent on the new system, clearly show how the design operates, and despite the fact they appear to show an in-line engine, the outline of the bike is clearly that of the V4-engined VFR1200T tourer.

As well as the "crumple-zone", Honda’s VFR1200T gains a new design of airbag that is more efficient, better placed and more compact than the original design used on the Goldwing.

Where the Goldwing’s bag is placed far forward on the bike, near the bars "“ in what would appear to be the logical position "“ the VFR’s airbag is mounted far further back, in the middle of the fuel tank. So rather than inflating towards the rider’s face in the way that a car’s airbag inflates towards the driver or the Goldwing’s bag operates, it inflates straight upwards against the rider’s chest to create a barrier between the rider and the forward parts of the bike. The design eliminates one of the problems with the original Goldwing version, which was that it needed to be secured by straps to keep it in the right position.

And combined with the anti-tipping crash structure, the design means that airbags can be fitted to a much wider range of machines than the earlier design. 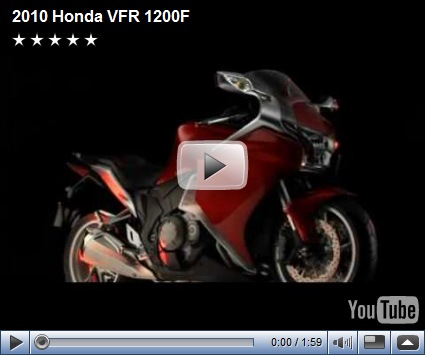 When Honda first introduced the Goldwing’s airbag, it believed that airbags were only suitable for machines like the Goldwing and perhaps scooters, for two reasons: first, these bikes had a very low centre of gravity, so were less likely to pitch forwards in a crash, and second because on scooters and big tourers, the rider tends not to move about, making it much easier to predict where the rider will be thrown in an accident. The two new elements on the VFR’s airbag system "“ the crash structure and the repositioned airbag "“ go a long way to solving both problems. The crash structure removes the need for an airbag-equipped bike to have a low centre of gravity, while the repositioned airbag will cope better even if the rider isn’t sitting bolt-upright in the centre of the seat.

Clearly, Honda is still taking relatively small steps in this regard "“ the VFR1200T is still a big touring bike, so the rider is unlikely to be crawling all over it as he might on a superbike, and the firm isn’t putting an airbag on the sportier version of the VFR1200, which doesn’t have the tourer’s jutting chin "“ but with these developments it’s possible to believe that in the relatively near future airbags could become as much a part of the everyday bikes we ride as they are in the cars we drive. And if they can save lives without affecting the fun of riding, that can only be a good thing.