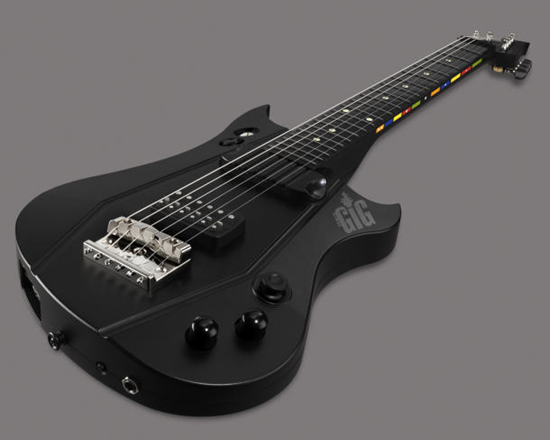 Power Gig, Rise of the SixString is like Rock Band, but uses real guitars.  Instead of the cheap plastic guitar that is used in Rock Band you will be using a fully functioning six-string guitar to control the

"As one might imagine, the game is being developed by a company connected with the guitar business. Developer/publisher Seven45 Studios is a sister company of First Act, a leading musical-instrument maker responsible for making the entry-level guitars, basses, and other instruments found at Wal-Mart, Target, and other big retailers."

When the guitar is hooked up to an Xbox 360 or PlayStation 3 system, you simply push a button and a dampening block pops up to hold the strings in place allowing you to control the game via the fingerboard.