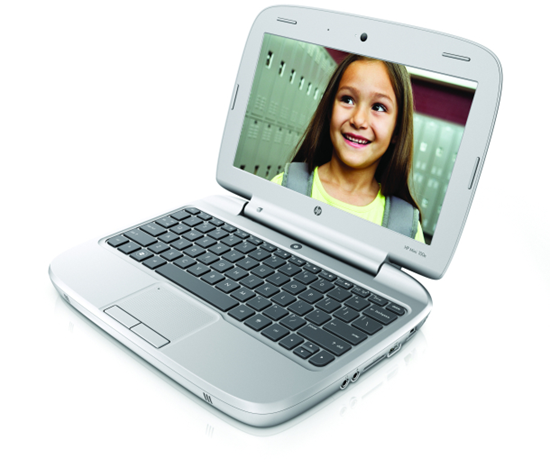 HP is joining the growing group of manufacturers releasing an educational laptop.  The laptop is small and sturdy.  The HP mini 100e is thick and ruggedized and will only set you back about $299 which is cheaper than most of HP's competitors.

"With a 10-inch matte screen, a “spill resistant” keyboard, and an LED indicator on the back lid that lets teachers know whether kids are online or not (which could be a good or bad thing depending on the class), the Mini 100e also has a rugged though not retracting handle and various software programs pre-installed, ranging from Microsoft Office Starter to a basic PDF reader. The Mini 100e also comes with a modem in addition to Ethernet, in the event it’s used in developing countries with older internet options. 802.11b/g Wi-Fi isn’t automatically included; it’s listed as optional. Available OS options include Windows 7 Starter, XP and SUSE Linux Enterprise 11.

The specs inside are largely Netbook standard: Atom N455 CPU, 1 GB of DDR3 RAM, and a 160GB hard drive. The Mini 100e can be fitted with either a three or six-cell battery. The keyboard is wide and 92% full-size, while the track pad was at least a little larger than on other budget Netbooks.

The unit felt reasonably sturdy if slightly heavy in our brief hands-on with a prototype. At about 3.2 pounds, it was a bit heavier than some Netbooks, but still easy enough to carry. Plain off-white matte plastic curved around the outer case, though HP also says a variety of customizations are possible with logos or colors. The Mini 100e will not be sold to general consumers, but will instead be available for institutional purchases.

$299 is certainly a reasonable price, though we wonder if we’d miss the potential usefulness of a touch-screen convertible tablet. The Mini 100e is expected to be available in July, just in time for the back-to-school rush. "