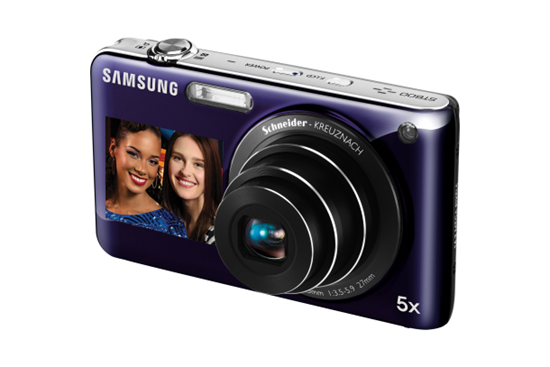 "There’s no reason to drag this out, so I’m going to keep it short. Wednesday, Samsung announced updates to its flagship DualView ultracompact cameras, the TL225 and TL200. You may know them better as the ones with the secondary LCD in front next to the lens. The 14-megapixel ST600 and ST100 are the new versions.

The ST600 gets a 27mm-equivalent wide-angle lens with a 5x zoom, while the ST100 has a 35mm-equivalent internal lens with a 5x zoom. Both have 3.5-inch LCDs on back and 1.8-inch LCDs in front; the front screens are 0.3-inch larger than the originals. The cameras capture 720p HD-resolution video and have a ton of auto features, too, so all you have to do is worry about how you look.

I may be missing something, but the $349.99 ST100 is priced $20 more than the ST600. Doesn’t seem right to get a narrower lens for more money, but I guess there’s a surcharge for the folding optics.

The TL225 was fun to use and since these look primarily the same, I expect they’ll be a good time, too. Or maybe not, who knows? Look for them in stores in September."